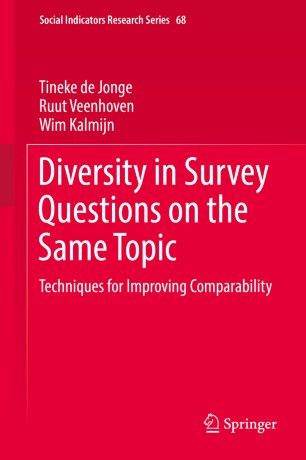 Diversity in Survey Questions on the Same Topic

This book describes why conventional methods fall short to solve the comparability problem and introduces three successive innovations to overcome these shortcomings. Comparability of results from different surveys using different items for the same topic is greatly hampered by the differences in response scales used. This reduces our accumulation of knowledge and has challenged researchers in the field of survey research for long to develop appropriate methods to transform ratings on different scales to attain comparable results and to correct for effects of changes in measurements and other influencing factors. The three innovations described in this volume are applied to data on happiness and life satisfaction, show better comparability of the survey results concerning the perceptions and opinions of people over time and across nations and at an increased opportunity for meta-analysis on these results.

Tineke de Jonge (1964) is a methodologist who studied Mathematics at the University of Amsterdam and the Delft University of Technology. She has always worked and is still working in the public domain, in jobs all having a central role for quantitative, socio-economic research in common. As senior researcher at Statistics Netherlands she was responsible for the program “Well-being of the Dutch population”. This well-being theme marked the start of her PhD-research on the comparability of responses to different survey questions on the same topic at the Erasmus University Rotterdam which she completed in July 2015. She continues to be involved as a senior volunteer in the research program in the field of comparability of survey results.

Ruut Veenhoven (1942) studied sociology and is also accredited in social psychology and social-sexuology. He is emeritus-professor of 'social conditions for human happiness' at the Erasmus University Rotterdam in the Netherlands and extra-ordinary professor at the North-West University in South Africa. His current research is on subjective quality of life. Major publications are: 'Conditions of happiness' (1984), 'Happiness in nations' (1993),'The four qualities of life' (2000) and 'Greater happiness for a greater number: Is that possible and desirable?' (2010). He also published on abortion, love, marriage and parenthood. Ruut Veenhoven is director of the World Database of Happiness and founding editor of the Journal of Happiness Studies.

Wim Kalmijn (1934-2015) studied chemical technology at the Delft University of Technology in the Netherlands. He became an employee of the Unilever Research Laboratory at Vlaardingen and worked in various departments; he acted as Training Officer, as Manager of the Department of Statistics and Experimental Design and as Information Manager. Some years after his retirement he joined the Happiness Research Group of the Erasmus University Rotterdam. As senior research volunteer he contributed to methodological and statistical aspects, in particular in connection with the World Database of Happiness and the Happiness International Scale Interval Study. Part of his research is reported in his PhD-thesis “Quantification of Happiness Inequality” (2010).