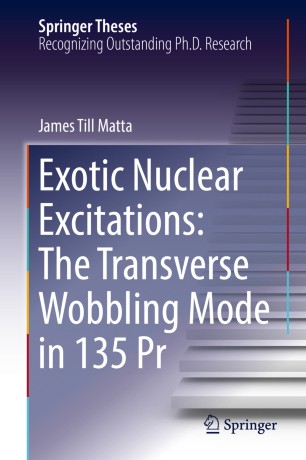 The work presented in this thesis established the existence of wobbling at low spin and low deformation in the Z~60, N~76 nuclear region.  This opens the region to further searches for wobbling and shows that wobbling is not confined to a particular quasiparticle orbital, spin or deformation.

While deformed nuclei usually have axial shape, triaxial shapes have been predicted at low to moderate spins in certain regions of the nuclear chart (e.g. Z~60, N~76 and Z~46, N~66).  Observation of one of the fingerprints of triaxiality, chirality and wobbling, guarantees that the nucleus is axially asymmetric.  While chirality has been observed in numerous nuclei from many regions of the nuclear chart, wobbling, prior to this work, had only been observed at high spins in super deformed bands in five nuclei confined to the Z~70, N~90 region.

Additionally, this dissertation establishes a new interpretation for the wobbling phenomenon.  It shows for the first time that the nucleon aligns to the short axis, which explains the decrease in wobbling energies with angular momentum seen on this and all previous wobbling nuclei while still explaining the observed B(E2out)B(E2in) ratios.  This is a new phenomenon, which is in contrast to the increase of the wobbling energies predicted by Bohr and Mottelson.

Dr James Matta was awarded the PhD degree by the University of Notre Dame in 2015, and is now with Oak Ridge National Laboratory.