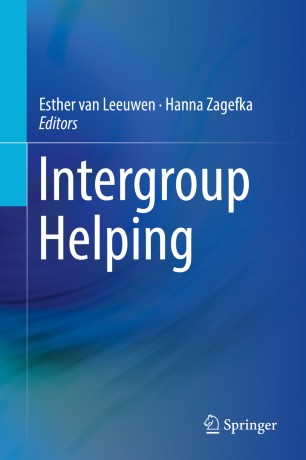 To advance this argument, the first section covers traditional research approaches in which the willingness to help other groups is construed as a form of discrimination. Then, the second section looks at the reasons why people may be motivated to help other groups. Finally, the last section explores intergroup helping in a wide range of real world settings, such as help for disaster victims or refugees/migrants. These contributions suggest that intergroup relations can be truly positive. Thus, Intergroup Helping informs researchers from fields as diverse as positive psychology, conflict resolution, fundraising, migration, and intergroup relations about the current state of affairs of research on intergroup helping, and sets out an agenda for further exploration. Tapping into the current trend towards positive psychology, it moves away from the traditional view within intergroup relations research of the group as a ‘source of trouble’, with the ultimate goal of promoting real positive behaviour that breaches intergroup divides.

Esther van Leeuwen received her PhD from Leiden University in 2001. Between 2001 and 2014 she worked as an assistant professor at VU University Amsterdam. Since 2014 she has been an assistant professor at Leiden University in social and organisational psychology. Esther’s research focuses on intergroup helping (for example, between countries or organisations), and the loyalty employers extend towards their employees. She is also interested in corporate reputation, empowerment, and separatism conflict. She is an active blogger on various topics. Please visit her website (www.esthervanleeuwen.nl) for her blogs, and for more information about her research interests, teaching, PhD students, publications, and CV.

Dr. Hanna Zagefka is a Reader in Social Psychology at Royal Holloway, University of London, in social psychology. Her research interests are in social psychology, particularly intergroup relations, social identity (especially national or ethnic identity), acculturation, prejudice, and intergroup helping. She is Co-Editor-in-Chief of the British Journal of Socal Psychology.