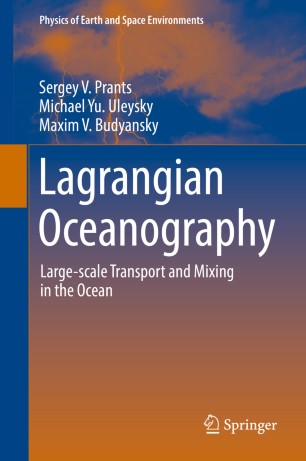 Large-scale Transport and Mixing in the Ocean

This book uses the Lagrangian approach, especially useful and convenient for studying large-scale transport and mixing in the ocean, to present a detailed view of ocean circulation. This approach focuses on simulations and on monitoring the trajectories of fluid particles, which are governed by advection equations. The first chapter of the book is devoted to dynamical systems theory methods, which provide the framework, methodology and key concepts for the Lagrangian approach. The book then moves on to an analysis of chaotic mixing and cross-stream transport in idealized models of oceanic meandering currents like the Gulfstream in the Atlantic, the Kuroshio in the Pacific, and Antarctic Circumpolar Current, after which the current state of physical oceanography is reviewed. The latter half of the book applies the techniques and methods already described in order to study eddies, currents, fronts and large-scale mixing and transport in the Far-Eastern seas and the north-western part of the Pacific Ocean. Finally, the book concludes with a discussion of Lagrangian simulation and monitoring of water contamination after the Fukushima disaster of 2011. The propagation of Fukushima-derived radionuclides, surface transport across the Kuroshio Extension current, and the role of mesoscale eddies in the transport of Fukushima-derived cesium isotopes in the ocean are examined, and a comparison of simulation results with actual measurements are presented.
Written by some of the world leaders in the application of Lagrangian methods in oceanography, this title will be of benefit to the oceanographic community by presenting the necessary background of the Lagrangian approach in an accessible manner.

Sergey V. Prants is the Head of the Department of Oceanic and Atmospheric Physics and Head of the Laboratory of Nonlinear Dynamical Systems of the Pacific Oceanological Institute of the Russian Academy of Sciences. His research interests comprise of nonlinear dynamical processes, Hamiltonian and dissipative chaos, self-organization, and dynamical symmetries. He's the author of five books and one hundred papers in international journals.