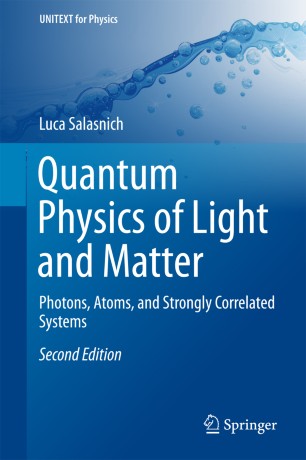 Quantum Physics of Light and Matter

This compact but exhaustive textbook, now in its significantly revised and expanded second edition, provides an essential introduction to the field quantization of light and matter with applications to atomic physics and strongly correlated systems. Following an initial review of the origins of special relativity and quantum mechanics, individual chapters are devoted to the second quantization of the electromagnetic field and the consequences of light field quantization for the description of electromagnetic transitions. The spin of the electron is then analyzed, with particular attention to its derivation from the Dirac equation. Subsequent topics include the effects of external electric and magnetic fields on the atomic spectra and the properties of systems composed of many interacting identical particles. The book also provides a detailed explanation of the second quantization of the non-relativistic matter field, i.e., the Schrödinger field, which offers a powerful tool for the investigation of many-body problems, and of atomic quantum optics and entanglement. Finally, two new chapters introduce the finite-temperature functional integration of bosonic and fermionic fields for the study of macroscopic quantum phenomena: superfluidity and superconductivity. Several solved problems are included at the end of each chapter, helping readers put into practice all that they have learned.

Luca Salasnich is an Associate Professor of Condensed Matter Physics at the Department of Physics and Astronomy “Galileo Galilei”, University of Padova, Italy. He was previously a research scientist with the Italian National Research Council (CNR). Dr. Salasnich was awarded an MSc in Physics by the University of Padova in 1991, and his PhD in Theoretical Physics by the University of Florence in 1995. His fields of research are condensed matter theory and statistical physics, in particular nonlinear phenomena and macroscopic quantum effects (like superfluidity and superconductivity) in ultra-cold atomic gases and other many-body systems. At the University of Padova, Dr. Salasnich is a member of the Scientific Committee of Area 2 (Physical Sciences) and President of the Teaching Council for the BSc in Optics and Optometrics. He has written more than 130 scientific papers for international journals, with over 2500 citations.