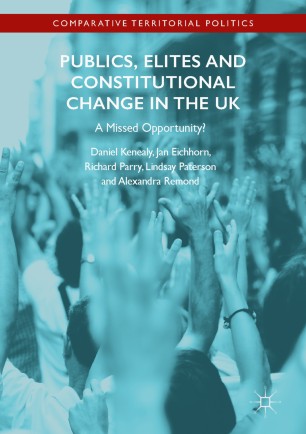 Publics, Elites and Constitutional Change in the UK

This book explores the governance of the UK, and the process of constitutional change, between Scotland’s independence referendum in September 2014 and the UK general election in May 2015. The book contrasts the attitudes of the public, captured through an original survey, with those of politicians, civil servants, and civic leaders, identified through over forty interviews. It pays particular attention to two case studies involving recent changes to the UK’s governing arrangements: the Smith Commission and the transfer of further powers to the Scottish Parliament, and Greater Manchester’s devolution deal that has become a model for devolution across England. It also considers the issue of lowering the voting age to 16, contrasting the political attitudes of younger voters in Scotland with those in the rest of the UK. The book will be of interest to students and scholars of UK politics, devolution, constitutional change, public attitudes, and territorial politics.

Daniel Kenealy and Jan Eichhorn are Lecturers in Social Policy, Richard Parry is Honorary Fellow in Social Policy, Lindsay Paterson is Professor of Education Policy and Alexandra Remond is Doctoral Researcher in Politics. All are based at the University of Edinburgh’s School of Social and Political Science, UK.

“This book is a fascinating study of how decisions about the governance of the four parts of the UK have been made in the wake of the Scottish Independence referendum, and of the limited role that public attitudes have seemingly in that process. It is essential reading for anyone interested in the future of devolution in the UK.” (Professor John Curtice, University of Strathclyde, UK)

“This timely volume is essential reading for all those interested in the ongoing reform of the constitutional and governmental architecture of the United Kingdom in the wake of the Scottish independence referendum. The authors provide a much-needed synthesis of political and public opinion on a range of critical issues which have come to define debates about citizenship and identity politics in the United Kingdom.” (Dr Andy Mycock, University of Huddersfield, UK)