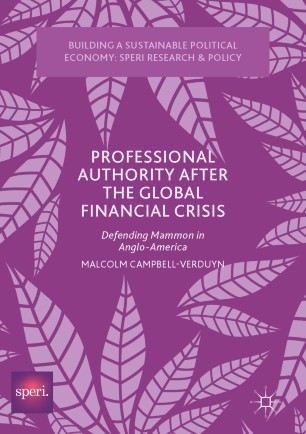 This book challenges amoral views of finance as the leading realm in which mammon – wealth and profit – is pursued with little overt regard for morality. The author details an enhanced ethical emphasis by leading Anglo–American professionals in the aftermath of the 2007-8 global financial crisis. Instead of merely stressing expert knowledge, professionals sought to overcome the alleged impossibility of serving “two masters” – mammon and God – by embracing religious finance, socio-economic inequality, sustainability and other overtly moral issues. Continuities in liberal values and ideas, however, limited the impact of this enhanced ethical emphasis to restoring the professional authority, as well as to more fundamentally reforming of Anglo–American finance following the most severe period of instability since the Great Depression. Providing a nuanced account of post-crisis change and continuity in a crucially important industry, Campbell-Verduyn advances a dynamic, process-based understanding of authority that will appeal to international political economists and sociologists alike.

Malcolm Campbell-Verduyn is Research Fellow at the Balsillie School of International Affairs, Waterloo, Canada. His research combines a general focus on language and ideas in the global political economy with a specific interest in the roles of non-state actors, technologies and technical artefacts in contemporary global governance.

“Malcolm Campbell-Verduyn offers an original take on professional authority in the aftermath of the global financial crisis. He carefully traces how the crisis challenged the expert knowledge and technical authority of financial services providers, economists, and advisories. He shows that these actors sought to reassert their professional authority by taking up moral causes such the distribution of wealth and branching into moral niche markets such as Islamic and environmental finance. His conclusion that this “ethical turn” is not much more than a strategy of self-legitimation that leaves the basic principles of Anglo-American finance uncontested is both incisive and – at a political level – deeply frustrating.” (Lena Rethel, Princeton University, USA and University of Warwick, UK)
Buy options