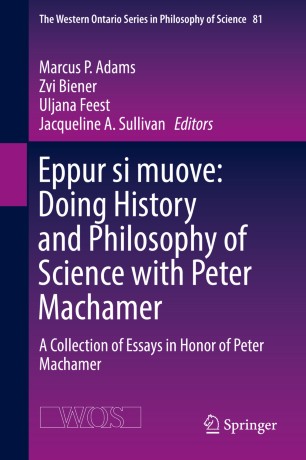 A Collection of Essays in Honor of Peter Machamer

Part of the The Western Ontario Series in Philosophy of Science book series (WONS, volume 81)

This volume is a collection of original essays focusing on a wide range of topics in the History and Philosophy of Science. It is a festschrift for Peter Machamer, which includes contributions from scholars who, at one time or another, were his students. The essays bring together analyses of issues and debates spanning from early modern science and philosophy through the 21st century. Machamer’s influence is reflected in the volume’s broad range of topics. These include: underdetermination, scientific practice, scientific models, mechanistic explanation in contemporary and historical science, values in science, the relationship between philosophy and psychology, experimentation, supervenience and reductionism.

Marcus P. Adams is an Assistant Professor of Philosophy at the University at Albany, SUNY. His research focuses on the History of Early Modern Philosophy, especially on the work of Thomas Hobbes, and in History and Philosophy of Science generally. His research has appeared in journals such as Philosophical Studies, Synthese, The British Journal for the History of Philosophy, and History of Philosophy Quarterly. Past work has considered topics such as the nature of science for Hobbes, the relationship of Aristotelian rhetoric to dialectic and politics, and Margaret Cavendish’s criticisms of Hobbes’s materialism.

Zvi Biener is an Assistant Professor of Philosophy at the University of Cincinnati. His research concerns the unity of science in early modernity, focusing on early-modern views regarding reduction and dependence of branches of knowledge, forms of demonstration and deduction, and the metaphysical underpinnings of the mathematical sciences, particularly Newtonian science. He also works on philosophical issues in data science.He recently edited Newton and Empiricism with Eric Schliesser (Oxford University Press, 2014) and is the author of essays in journals such as The Journal of History of Philosophy, Studies in History and Philosophy of Science, and the Southern Journal of Philosophy.

Uljana Feest is Professor of Philosophy at the Leibniz University of Hannover (Germany). In her research, she analyzes observational and experimental practices in science, with a special emphasis on the cognitive and behavioral sciences, broadly construed. She is particularly interested in the question of what constitutes scientific evidence in those fields: how it is produced, how it is interpreted, what kinds of background assumptions need to be in place in order to make inferences from empirical data to a given hypothesis, and what are criteria of adequacy for such inferences. She is in the process of finishing a project that investigates these questions within the framework of thinking about the role of operationism and operational definitions in the processes of scientific knowledge-generation. Feest takes inspirations from analyses of methodological reflections and practices of past and present science and is especially interested in debates that took place within early experimental psychology.