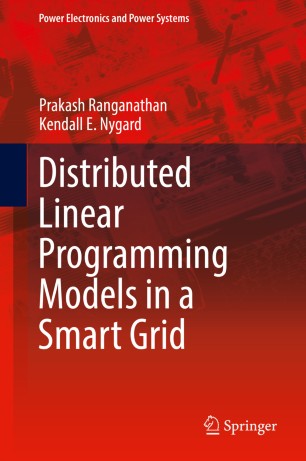 This book showcases the strengths of Linear Programming models for Cyber Physical Systems (CPS), such as the Smart Grids. Cyber-Physical Systems (CPS) consist of computational components interconnected by computer networks that monitor and control switched physical entities interconnected by physical infrastructures. A fundamental challenge in the design and analysis of CPS is the lack of understanding in formulating constraints for complex networks. We address this challenge by employing collection of Linear programming solvers that models the constraints of sub-systems and micro grids in a distributed fashion.
The book can be treated as a useful resource to adaptively schedule resource transfers between nodes in a smart power grid. In addition, the feasibility conditions and constraints outlined in the book will enable in reaching optimal values that can help maintain the stability of both the computer network and the physical systems. It details the collection of optimization methods that are reliable for electric-utilities to use for resource scheduling, and optimizing their existing systems or sub-systems. The authors answer to key questions on ways to optimally allocate resources during outages, and contingency cases (e.g., line failures, and/or circuit breaker failures), how to design de-centralized methods for carrying out tasks using decomposition models; and how to quantify un-certainty and make decisions in the event of grid failures.
• The only book to focus on Linear Programming Methods for Cyber Physical Systems;
• Features AMPL codes that show how to formulate IEEE test grid systems;
• Includes code that can be used to tackle problems such as resource allocation, decomposition of a major grid into micro grids, and addressing uncertainty under renewable penetration scenarios.

Kendall E. Nygard is a full professor of computer science at North Dakota State University, Fargo, North Dakota. He earned his PhD degree at Virginia Polytechnic Institute. He has fulfilled many roles at NDSU and the North Dakota University System, including Department Chair, faculty representative on the State Board of Higher Education, and Presiding officer of the NDSU University Senate. He has advised 25 PhD students and more than 150 Master of Science students. In research, he been awarded more than 50 grants and contracts and is widely published. Application areas in which he has conducted research include the smart grid, sensor networks, unmanned air systems, wireless networks, encryption, and social media. His primary methodologies are optimization models, artificial intelligence, and big data analytics. In, 2013 and 2014 he served in Washington D. C. as a Jefferson Science Fellow and Senior Science Adviser for the U. S. Department of State and the U. S. Agency for International Development. He is currently a Virtual Fellow for the U. S. Department of State and a Fellow of the International Academy, Research, and Industry Association. Currently he is leading a Cyber Security research and education initiative for the North Dakota University System.