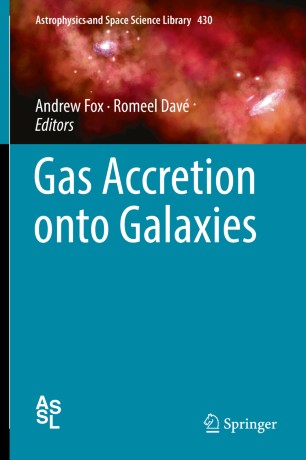 This edited volume presents the current state of gas accretion studies from both observational and theoretical perspectives, and charts our progress towards answering the fundamental yet elusive question of how galaxies get their gas. Understanding how galaxies form and evolve has been a central focus in astronomy for over a century. These studies have accelerated in the new millennium, driven by two key advances: the establishment of a firm concordance cosmological model that provides the backbone on which galaxies form and grow, and the recognition that galaxies grow not in isolation but within a “cosmic ecosystem” that includes the vast reservoir of gas filling intergalactic space. This latter aspect in which galaxies continually exchange matter with the intergalactic medium via inflows and outflows has been dubbed the “baryon cycle”. The topic of this book is directly related to the baryon cycle, in particular its least well constrained aspect, namely gas accretion.

Accretion is a rare area of astrophysics in which the basic theoretical predictions are established, but the observations have been as yet unable to verify the expectations. Accretion has long been seen around the Milky Way in so-called High Velocity Clouds, but detecting accretion even around nearby galaxies has proved challenging; its multi-phase nature requires sensitive observations across the electromagnetic spectrum for full characterization. A promising approach involves looking for kinematic signatures, but accretion signatures are often confused with internal motions within galaxies.

Accretion studies therefore touch a wide range of astrophysical processes, and hence a wide cross-section of the astronomical community. As observational facilities are finally able to access the wavelength ranges and depths at which accretion processes may be manifest, the time is right to survey these multiple lines of investigation and determine the state of the field in accretion studies of the baryon cycle.

Andrew Fox is an ESA/AURA astronomer at the Space Telescope Science Institute (STScI) in Baltimore, Maryland. His research focuses on the study of gas in and around galaxies and its role in controling galactic star-formation rates. He is experienced in the use of spectroscopy to characterize diffuse astrophysical gas, particularly in the Milky Way and the Magellanic Clouds. He recently co-authored an invited review on the Magellanic Stream in the Annual Reviews of Astronomy and Astrophysics. Before joining the staff at STScI in 2011, he held postdoctoral fellowships at the Institut d’Astrophysique de Paris in France and the European Southern Observatory in Chile, and spent time as a visiting scientist at the University of Cambridge.

Romeel Dave is a professor of astrophysics and South African National Research Chair in Cosmology based in Cape Town at the University of the Western Cape, the South African Astronomical Observatory, and the African Institute for Mathematical Physics.  His interests include galaxy formation, circumgalactic and intergalactic gas, reionization, and cosmology.  His work employs supercomputer simulations to model the evolution of galaxies from the Big Bang until today, with the goal of understanding the wide diversity and global trends seen in galaxies and gas across cosmic time.  Before moving to Cape Town in 2013, he was a professor for 10 years at the University of Arizona, and held prior postdocs at Steward Observatory and Princeton University. Beginning in 2017 he will hold the Chair of Physics at the University of Edinburgh.

“Each chapter is written by a different author, a person very knowledgeable in the topic covered by their respective chapter and I was glad to see that very recent research was also included in the discussion … . I would recommend this book to someone seeking an in-depth overview of a topic covered in the book … .” (Electra Panagoulia, The Observatory, April, 2018)
Buy options