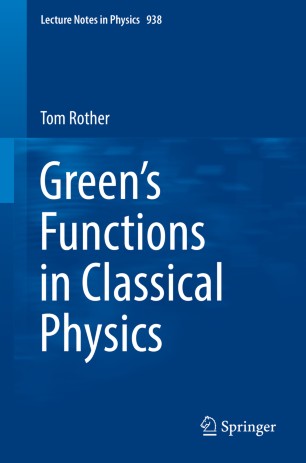 In 1828 George Green has published an essay that was unfortunately sunken into oblivion shortly after its publication. It was rediscovered only after several years by the later Lord Kelvin. But since this time, using Green’s functions for solving partial differential equations in physics has become an important mathematical tool. While the conceptual and epistemological importance of these functions were essentially discovered and discussed in modern physics - especially in quantum field theory and quantum statistics - these aspects are rarely touched in classical physics. In doing it, this book provides an interesting and sometimes new point of view on several aspects and problems in classical physics, like the Kepler motion or the description of certain classical probability experiments in finite event spaces. A short outlook on quantum mechanical problems concludes this book.

Dr. Tom Rother was born in 1957 in Wolfen, Germany. He received the Dr. rer. nat. and Dr. habil. degrees from the University of Greifswald in 1987 and 1999. Since 1987, he has been with the German Aerospace Center. In 1990, he received the Young Scientist Scholarship of the URSI, and in 1991 a special grant of the Alexander von Humboldt Foundation. He is a Senior Scientist of the German Aerospace Center since 2004. Dr. Rother’s research interests are in quantum statistics of charged particle systems, in electromagnetic wave theory, and in quantum optics. With Springer he has published 2 books on electromagnetic wave scattering on nonspherical particles.

“This book serves as a valuable and self-contained introduction for those who want to become more familiar with GFs and their importance and usage in classical physics” (Nikolaos L. Tsitsas, Mathematical Reviews, June, 2018)
Buy options