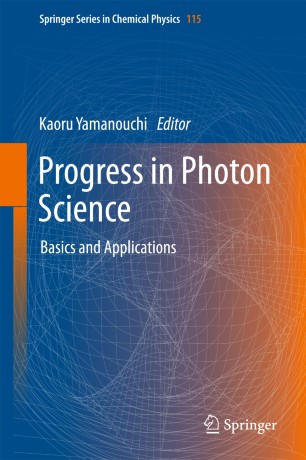 This book features chapters based on lectures presented by world-leading researchers of photon science from Russia and Japan at the first “STEPS Symposium on Photon Science” held in Tokyo in March 2015. It describes recent progress in the field of photon science, covering a wide range of interest to experts in the field, including laser-plasma interaction, filamentation and its applications, laser assisted electron scattering, exotic properties of light, ultrafast imaging, molecules and clusters in intense laser fields, photochemistry and spectroscopy of novel materials, laser-assisted material synthesis, and photon technology.

Prof. Yamanouchi is one of the world-leading scientists in the new interdisciplinary field of ultrafast intense laser science. He has organized a series of international symposia over the years as chair or as one of the co-chairs. For example, the International Symposium on Ultrafast Intense Laser Science (ISUILS) series, which started in 2002, has now received world-wide recognition as one of the most successful symposia in this new research field. Prof. Yamanouchi also organized Asian Symposium on Intense Laser Science 1 in 2004 at Tokyo to promote the research field in Asian countries. Prof. Yamanouchi is Coordinator of The Students and Researchers Exchange Program in Science (STEPS), an academic exchange program of the School of Science and Department of Civil Engineering, the University of Tokyo, launched in October 2014.  Under this program, Prof. Yamanouchi has been working to facilitate research and student exchange between the University of Tokyo and two Russian universities, Lomonosov Moscow State University and St. Petersburg State University.  He organized the First STEPS Symposium on Photon Science in March 2015 under the program.