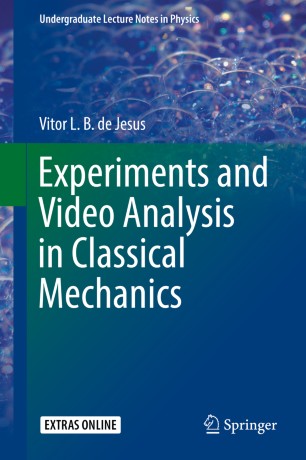 This book is an experimental physics textbook on classical mechanics focusing on the development of experimental skills by means of discussion of different aspects of the experimental setup and the assessment of common issues such as accuracy and graphical representation. The most important topics of an experimental physics course on mechanics are covered and the main concepts are explored in detail. Each chapter didactically connects the experiment and the theoretical models available to explain it. Real data from the proposed experiments are presented and a clear discussion over the theoretical models is given. Special attention is also dedicated to the experimental uncertainty of measurements and graphical representation of the results. In many of the experiments, the application of video analysis is proposed and compared with traditional methods.

Prof. Dr. Vitor Luiz Bastos de Jesus graduated in Physics in 1993 at Universidade Federal Fluminense (Niterói - Brazil). He obtained a Master’s degree in Physics in 1996 at the Brazilian Center for Research in Physics (CBPF), working on Nuclear Magnetic Resonance (NMR) applied to magnetic intermetallic systems. He obtained a PhD degree in atomic physics, in collaboration with the Van de Graaff Laboratory at Pontifícia Universidade Católica do Rio de Janeiro (PUC-Rio - Brazil). He worked as a post-doctoral fellow at the Van de Graaff Laboratory from 2000 until 2002, and then traveled to Germany to work at the Max-Planck Institut für Kernphysik, Heidelberg, as a collaborator researcher until 2004. Since then he teaches at Instituto Federal de Educação, Ciência e Tecnologia, Rio Janeiro (IFRJ), campus Nilópolis, Rio de Janeiro - Brazil, mainly in didactical laboratories of classical and modern physics, and keeps his research collaborations with various groups both in Brazil and abroad. He co-authored the textbook “Introdução à Física do Estado Sólido” (Introduction to Solid State Physics).