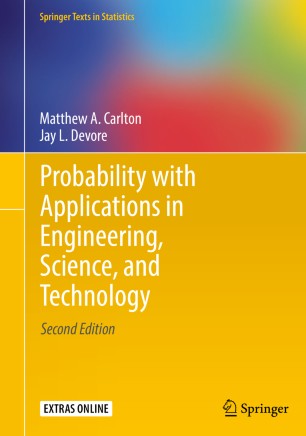 Probability with Applications in Engineering, Science, and Technology

This updated and revised first-course textbook in applied probability provides a contemporary and lively post-calculus introduction to the subject of probability. The exposition reflects a desirable balance between fundamental theory and many applications involving a broad range of real problem scenarios. It is intended to appeal to a wide audience, including mathematics and statistics majors, prospective engineers and scientists, and those business and social science majors interested in the quantitative aspects of their disciplines.

The textbook contains enough material for a year-long course, though many instructors will use it for a single term (one semester or one quarter). As such, three course syllabi with expanded course outlines are now available for download on the book’s page on the Springer website.

A one-term course would cover material in the core chapters (1-4), supplemented by selections from one or more of the remaining chapters on statistical inference (Ch. 5), Markov chains (Ch. 6), stochastic processes (Ch. 7), and signal processing (Ch. 8—available exclusively online and specifically designed for electrical and computer engineers, making the book suitable for a one-term class on random signals and noise).

For a year-long course, core chapters (1-4) are accessible to those who have taken a year of univariate differential and integral calculus; matrix algebra, multivariate calculus, and engineering mathematics are needed for the latter, more advanced chapters.

At the heart of the textbook’s pedagogy are 1,100 applied exercises, ranging from straightforward to reasonably challenging, roughly 700 exercises in the first four “core” chapters alone—a self-contained textbook of problems introducing basic theoretical knowledge necessary for solving problems and illustrating how to solve the problems at hand – in R and MATLAB, including code so that students can create simulations.

New to this edition

• Updated and re-worked Recommended Coverage for instructors, detailing which courses should use the textbook and how to utilize different sections for various objectives and time constraints

• Extended and revised instructions and solutions to problem sets

Matthew A. Carlton, Ph.D., is Professor of Statistics at California Polytechnic State University, San Luis Obispo, where he joined the faculty in 1999. He received a B.A. in Mathematics from the University of California, Berkeley and a Ph.D. in Mathematics from the University of California, Los Angeles, with an emphasis on pure and applied probability; his thesis research involved applications of the Poisson-Dirichlet random process. Matt has published papers in the Journal of Applied Probability, Human Biology, Journal of Statistics Education, and The American Statistician. He was also the lead content adviser for the “Statistically Speaking” video series, designed for community college statistics courses, and he has published a variety of educational materials for high school statistics teachers. Matt was responsible for developing both the applied probability course and the probability and random processes course at Cal Poly, which in turn inspired him to get involved in writing this text. His professional research focus involves applications of probability to genetics and engineering. Personal interests include travel, good wine, and college sports.

Jay Devore, Ph.D., received a B.S. in Engineering Science from the University of California, Berkeley, and a Ph.D. in Statistics from Stanford University. He previously taught at the University of Florida and Oberlin College and has had visiting positions at Stanford, Harvard, the University of Washington, New York University, and most recently for five successive years at Columbia University. He has been on the faculty at California Polytechnic State University, San Luis Obispo, since 1977, where he was Chair of the Department of Statistics for seven years and recently achieved the exalted status of Professor Emeritus. Prior to getting involved in textbook writing, Jay published papers in the Journal of the American Statistical Association, the Journal of Applied Probability, Biometrika, Communications in Statistics, and the Annals of Statistics. He has previously authored or coauthored six other books, including Modern Mathematical Statistics with Applications(Springer) and Probability and Statistics for Engineering and the Sciences (Cengage); the latter book won a McGuffey Longevity Award from the Text and Academic Authors Association for demonstrated excellence over time. He is a Fellow of the American Statistical Association, has been an associate editor for both the Journal of the American Statistical Association and The American Statistician, and received the Distinguished Teaching Award from Cal Poly in 1991. His recreational interests include reading, playing tennis, traveling, and cooking and eating good food.