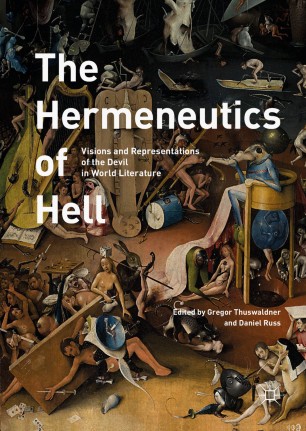 The Hermeneutics of Hell

Visions and Representations of the Devil in World Literature

This collection of essays analyzes global depictions of the devil from theological, Biblical, and literary perspectives, spanning the late Middle Ages to the 21st century. The chapters explore demonic representations in the literary works of Johann Wolfgang von Goethe, Fyodor Dostoyevsky, Dante Alighieri, Charles Baudelaire, John Milton, H.P. Lovecraft, and Cormac McCarthy, among others. The text examines other media such as the operas Orfeo and Erminia sul Giordano and the television shows Breaking Bad, The Sopranos, and Mad Men.
The Hermeneutics of Hell, featuring an international set of established and up-and-coming authors, masterfully examines the evolution of the devil from the Biblical accounts of the Middle Ages to the individualized presence of the modern world.

Gregor Thuswaldner is Dean of Arts and Sciences and Professor of Humanities at North Park University in Chicago. He earned his PhD from the University of North Carolina, Chapel Hill in North Carolina, USA. His most recent book publications include a translation of Felix Mitterer’s play Jägerstätter (with Robert Dassanowsky, 2015) and the essay collection Making Sacrifices: Visions of Sacrifice in European and American Cultures (with Nicholas Brooks, 2016).
L. Daniel Russ  is former Academic Dean and Professor of English at Gordon College, Executive Director of Christians in the Visual Arts, Headmaster of Trinity Christian Academy, and Managing Director of the Dallas Institute of Humanities and Culture. He earned his PhD from the University of Dallas in Texas, USA.  He is a Fellow of the Dallas Institute, a Senior Fellow of The Trinity Forum, and a Senior Fellow of The Alexandrian Forum. He is the author of Flesh-and-Blood Jesus: Learning to be Fully Human from the Son of Man.