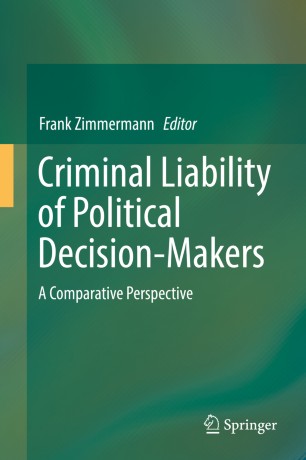 This book is dedicated to a fundamental conflict in modern states: those persons holding public office are no more than ordinary citizens. Therefore, their activities must – as a matter of principle – be subject to full judicial control. But at the same time, democratically legitimated politicians need some discretion in their decision-making.
Allegations of politicians committing criminal offences in office quickly attract a great deal of media attention. Even politicians themselves frequently use such allegations to discredit their political opponents. However, to date this topic has not been fully addressed on an academic level. This book is a first step in this direction.
The individual contributions cover topics such as:
Leading experts examine these and other issues from a comparative perspective.

Frank Zimmermann is a post-doctoral research fellow at the Ludwig-Maximilians-Universität München. His main fields of research are the relationship between criminal law and politics, German and European criminal law (particularly conflicts of criminal jurisdiction) as well as international cooperation in criminal matters.