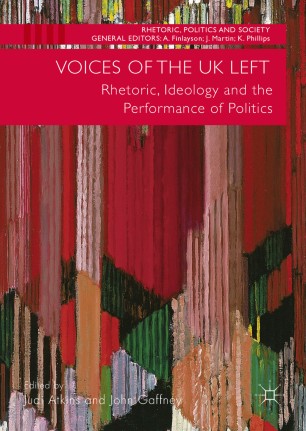 Voices of the UK Left

Rhetoric, Ideology and the Performance of Politics

This book brings together a team of specialists to explore why some left-wing politicians are able to communicate their message effectively, whereas others struggle to connect with the public. To address this question, it analyses the rhetoric and narratives employed by figures from British and Welsh Labour, the Green Party, the Scottish National Party and the radical left, as well as the anti-austerity movement. In doing so, the collection offers insights into why the performances of political actors such as Carwyn Jones and Nicola Sturgeon resonate with a wide audience, whereas some - like Jeremy Corbyn - have limited appeal beyond the party faithful. The volume provides an accessible examination of the language and ideas of the UK left, while offering a novel perspective on the challenges currently facing the Labour Party. It will therefore appeal to a wide readership, including scholars and students of rhetoric, ideology, political leadership, and British politics.

Judi Atkins is Lecturer in Politics at Coventry University, UK. She has published widely on the relationship between rhetoric, ideology and policy in Britain, and she is author of Justifying New Labour Policy (2011) and co-editor of Rhetoric in British Politics and Society (2014).

John Gaffney is Professor of Politics at Aston University, UK. His most recent books are France in the Hollande Presidency: The Unhappy Republic (2015) and Leadership and the Labour Party: Narrative and Performance (2016).

“This volume provides a fascinating insight into the rhetoric of the UK left. Exploring key themes around rhetoric and performance, its chapters capture fascinating insights on the contribution of key individuals and themes in the left's political thought. Published at a key juncture in the left's history, the book moreover provides thoughtful analysis for anyone interested in the past, and the future, of the left.” (Dr. Katharine Dommett, Deputy Director of the Crick Centre for the Public Understanding of Politics, UK)
Buy options