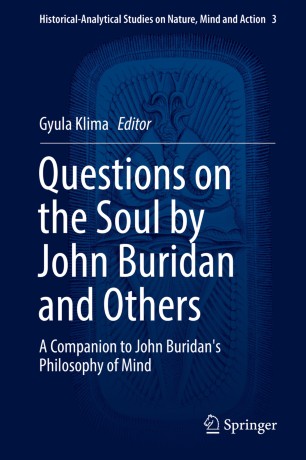 Questions on the Soul by John Buridan and Others

A Companion to John Buridan's Philosophy of Mind

This volume features essays that explore the insights of the 14th-century Parisian nominalist philosopher, John Buridan. It serves as a companion to the Latin text edition and annotated English translation of his question-commentary on Aristotle’s On the Soul. The contributors survey Buridan’s work both in its own historical-theoretical context and in relation to contemporary issues.

The essays come in three main sections, which correspond to the three books of Buridan’s Questions. Coverage first deals with the classification of the science of the soul within the system of Aristotelian sciences, and surveys the main issues within it.

The next section examines the metaphysics of the soul. It considers Buridan’s peculiar version of Aristotelian hylomorphism in dealing with the problem of what kind of entity the soul (in particular, the human soul) is, and what powers and actions it has, on the basis of which we can approach the question of its essence.

The volume concludes with a look at Buridan’s doctrine of the nature and functions of the human intellect. Coverage in this section includes the problem of self-knowledge in Buridan’s theory, Buridan’s answer to the traditional medieval problem concerning the primary object of the intellect, and his unique treatment of logical problems in psychological contexts.