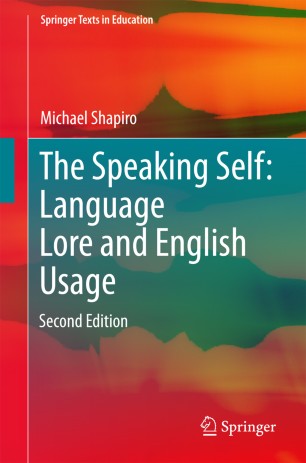 The Speaking Self: Language Lore and English Usage

Part of the Springer Texts in Education book series (SPTE)

This book aims to explain social variation in language, otherwise the meaning and motivation of language change in its social aspect. It is the expanded and improved 2nd edition of the author’s self-published volume with the same title, based on revised and adapted posts on the author’s Languagelore blog.

Each vignette calls attention to points of grammar and style in contemporary American English, especially cases where language is changing due to innovative usage. In every case where an analysis contains technical or recondite vocabulary, a Glossary precedes the body of the essay, and readers can also consult the Master Glossary which contains all items glossed in the text.

The unique form of the book’s presentation is aimed at readers who are alert to the peculiarities of present-day American English as they pertain to pronunciation, grammar, and style, without “dumbing down” or compromising the language in which the explanations are couched.

Praise for the First Edition

“Michael Shapiro is one of the great thinkers in the realm of linguistics and language use, and his integrated understanding of language and speech in its semantic and pragmatic structure, grammatical and historical grounding, and colloquial to literary stylistic variants is perhaps unmatched today. This book is a treasure to be shared.” Robert S. Hatten, The University of Texas at Austin

“Jewel of a book. . . . a gift to us all from Michael Shapiro. Like a Medieval Chapbook it can be a kind of companion whose vignettes on language use can be randomly and profitably consulted at any moment. Some may consider these vignettes opinionated. That would be to ignore how deeply anchored each vignette is in Shapiro’s long and rare polyglot experience with language. It could well serve as a night table book, taken up each night to read and reflect upon ––to ponder––both in the twilight mind and in the deeper reaches of associative somnolence. There is nothing else like it that I know of.” James W. Fernandez, The University of Chicago

Michael Shapiro, Professor Emeritus of Slavic and Semiotic Studies at Brown University, was born in 1939 in Yokohama (Japan) and grew up speaking Russian, Japanese, and English. He immigrated to the United States with his parents in 1952 and was educated in Tokyo, Los Angeles, and Cambridge, Massachusetts. His career as a teacher and scholar spans over half a century. He has taught at several universities, including the University of California (Los Angeles and Berkeley) and Princeton, and served as president of the Charles S. Peirce Society in 1991. He is the co-author, with his late wife the medievalist and Renaissance scholar Marianne Shapiro, of Figuration in Verbal Art (1988) and The Sense of Form in Literature and Language (2nd ed., 2009).

From the reviews of the previous edition:

“I was overwhelmed by [the book’s] richness and diversity. Besides its great general value for linguistic theory (and its popularization), it would obviously deserve to constitute an important part also of the orthoepic discussion that should be going on in the US. This is no doubt an extraordinary achievement which reflects a rare mastery of the most various aspects of language and language usage. The outspokenly pedagogical approach, witnessed by the clear English prose and the introductory glossaries, should make the book accessible to a broad American-English public of readers interested in their mother tongue and its fate. It’s  an eminent oeuvre which hopefully will receive all the attention it deserves!” (Nils B. Thelin, Universities of Uppsala and Oldenburg)

“The Speaking Self is full of surprises and discoveries. It is an impressive collection of observations about language use, original interpretations, linguistic wisdom.” (Donka Minkova Stockwell, University of California, Los Angeles)

“Michael Shapiro’s new book takes an Internet genre – a corpus of weblog posts – and  revitalises the conventional `Introduction to Linguistics’ by means of a microscopic analysis of a multitude of linguistic blemishes that characterise Anglo-Saxon culture today. The Speaking Self should be on every linguist’s bookshelf, should figure in the bibliographies of  linguistics courses, and should be mandatory reading for TV presenters, sports commentators and the subeditors of our national newspapers. A very fine achievement.” (Anthony Jappy, University of Perpignan)

“Reading this book is like having a conversation with an expert in linguistics.  . . . I found  each of the entries comparable to a New Yorker cartoon. Each episode is interesting and a lot of them are funny, but the amusement is the beginning of an understanding. Because they describe what we see and hear all around us, they make the ordinary become remarkable. We see how language is at work in us and how we declare ourselves in the most common things we say. (Robert Sokolowski, The Catholic University of America)

“I’ve read miscellanies on the lore and usage of language before, but never one that shows all at once such a fine ear, such love for language, and such theoretical depth glimmering in brief dips and deeper dives alike. This is the kind of book that has value far outweighing any disagreement about particulars. If you enjoy and value the lore and study of language, then read The Speaking Self because Michael Shapiro is a master.” (Ben Udell, The Peirce Blog)

“Michael Shapiro, one of the world's foremost linguists, has written a book on English language usage and lore which is as informative as it is fun to read. You can 'drop into' the book at any place--its unique structure allowing you to virtually open it at random and find something of interest--and read a short, well written essay (or two or three or many) on topics you may have considered before, or some you've perhaps never thought about. You come away from each essay positively delighted in knowing something more than you knew before.” (Gary J. Richmond, LaGuardia Community College, City University of New York)

“The Speaking Self is a book that is at once erudite, provocative, informative, and amusing. I recommend dipping in anywhere to enjoy Michael Shapiro’s wide-ranging examples followed by his insightful commentary. . . . [He] has both an ear and a mind for language, and the result is a highly enjoyable and unusually thoughtful book. (J. Norris Frederick, Queens University of Charlotte)

“Shapiro serves us vignettes with living vine leading to soothing wine, up to tiny festive bubbles. He picks up raw, rough rocks and polishes them into gems, arranged into appropriate jewelry. His book informs and entertains with precision and charm.” (Raimo Anttila, University of California, Los Angeles)

"Anyone who loves words will love this book. The proper use of language, the mis-pronunciation of words, why it happens and what it means—all this and more may be found in Professor Shapiro’s engaging, thought-provoking analysis of contemporary English—a page-turner I couldn’t put down, and gladly return to again and again. In a word, not only is The Speaking Self thoroughly engaging, at the same time it is authoritative, informative, and full of surprises about the language we all take for granted, but clearly don’t understand as well as we should. Thanks to Michael Shapiro, this book goes a long way in making up for what we don’t know but can now better understand and appreciate thanks to the erudite and often humorous explanations he provides. This book is a must for anyone with an interest in language in general and words in particular. (Joseph W. Dauben, Lehman College and the Graduate Center of the City University of New York)

“It is a splendid piece, immensely learned, written with clarity and rigor . . . and I have learned a great deal from it. I think of it as a feast for those drawn to dictionaries, cultural history and to the ever fascinating, and for me as yet unsolved, issue of the origin of Language.” (Stephen Werner, University of California, Los Angeles)

“It is a fantastic book, immensely interesting and extraordinarily well written, and I am totally amazed at [its] learning and erudition. . . . delightful and rewarding!”  (Stig Eliasson, Johannes Gutenberg-Universität Mainz)

“Michael Shapiro’s work is truly singular in numerous respects, but no one is more characteristic than the manner in which he brings into deepest harmony a theoretical sophistication and the unblinkingly attentive concern with fine-grained detail (detail as salient as subtle). He combines the approach of a tough-minded linguist for whom evidence  ––and evidence alone––is decisive and the fluid sensitivity of the poet. This makes these reflections a joy to read. Even in the case of the casual reader, one’s own ear and eye will become more finely attuned to important features of our linguistic practices. These reflections add up to nothing less than a vividly realized portrait of speaking selves in all their complexity.”  (Vincent Colapietro, The Pennsylvania State University)