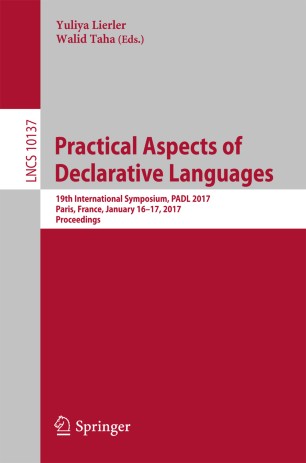 This book constitutes the proceedings of the 19th International Symposium on Practical Aspects of Declarative Languages, PADL 2017, held in Paris, France, in January 2017 and collocated with the ACM SIGPLAN Symposium on Principles of Programming Languages.
The 14 papers presented in this volume were carefully reviewed and selected from 27 submissions.
They deal with novel applications and implementation techniques for all forms of declarative languages, including but not limited to logic, constraint, and functional languages.