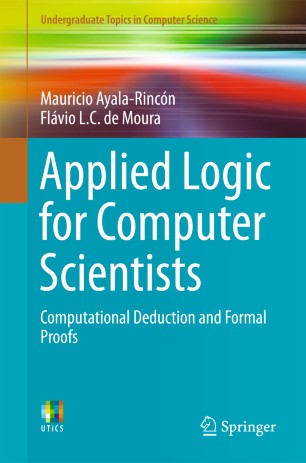 This book provides an introduction to logic and mathematical induction which are the basis of any deductive computational framework. A strong mathematical foundation of the logical engines available in modern proof assistants, such as the PVS verification system, is essential for computer scientists, mathematicians and engineers to increment their capabilities to provide formal proofs of theorems and to certify the robustness of software and hardware systems.

The authors present a concise overview of the necessary computational and mathematical aspects of ‘logic’, placing emphasis on both natural deduction and sequent calculus. Differences between constructive and classical logic are highlighted through several examples and exercises. Without neglecting classical aspects of computational logic, the authors also highlight the connections between logical deduction rules and proof commands in proof assistants, presenting simple examples of formalizations of the correctness of algebraic functions and algorithms in PVS.

Applied Logic for Computer Scientists will not only benefit students of computer science and mathematics but also software, hardware, automation, electrical and mechatronic engineers who are interested in the application of formal methods and the related computational tools to provide mathematical certificates of the quality and accuracy of their products and technologies.

Mauricio Ayala-Rincón is a Professor in Theory of Computing at the  Universidade de Brasília. He received his doctorate in Informatics from the Universität Kaiserslautern.  His primarily research interests are in logic and semantics of computation. His publications are related with rewriting, lambda calculus and with the applications of these frameworks in theorem proving and automated reasoning.

Flávio L. C. de Moura is an Adjunct Professor in Computer Science at the Universidade de Brasília where he received his Ph.D in Mathematics (Theory of Computing). He has done long term research programs at Heriot-Watt University and Université Paris Diderot. His research is focused on lambda calculus and explicit substitutions, and in the application of proof assistants for the formalization of computation and mathematics.