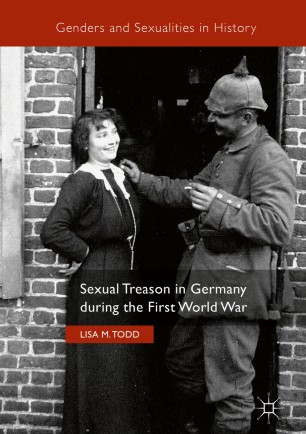 Sexual Treason in Germany during the First World War

This book is the first comprehensive study of sexual lives in Germany and occupied Europe during the First World War. Reconsidering sex in war brings to life a whole cast of characters too often left out of the historical narrative:  widowed women who worked as prostitutes, fresh-faced recruits who experienced the war in a VD hospital, eugenicists who conflated sex and national decline, soldiers’ wives ostracized by neighbourhood rumour mills. By considering the confluence of public discourse, state policy, and everyday life, Lisa M. Todd adds to the growing body of knowledge on war and society in the twentieth century. By incorporating the 1914-1918 experience into the longer frame of the pre-war sex reform movement and the post-war Allied occupation of the Rhineland, this book is able to more fully evaluate the impact of the war years on the history of intimate relations in early twentieth-century Germany.

Lisa M. Todd is Associate Professor of History at the University of New Brunswick, Canada, where she teaches the history of modern Germany, war, genocide, gender, and sexuality. She is also director of the Network for the Study of Civilians, Soldiers and Society at the Milton F. Gregg Centre for the Study of War and Society.