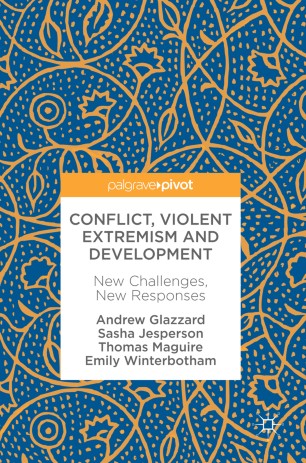 This edited volume examines the implications for international development actors of new kinds of terrorism taking place in civil conflicts. The threat from terrorism and violent extremism has never been greater – at least in the global South where the vast majority of violent extremist attacks take place. Some of the most violent extremist groups are also parties to civil conflicts in regions such as the Middle East and the Horn of Africa. But are these groups – especially the violent Islamists which constitute the greatest current threat – qualitatively different from other conflict actors? If they are, what are the implications for development practitioners working in war zones and fragile or poverty-afflicted countries? This study aims to answer these questions through a combination of theoretical enquiry and the investigation of three case studies – Kenya, Nigeria, and Iraq/Syria. It aims to illuminate the differences between violent Islamists and other types of conflict actor, to identify the challenges these groups pose to development practice, and to propose a way forward for meeting these challenges.

Andrew Glazzard is the Director of the National Security and Resilience Studies group at RUSI, UK.

Sasha Jesperson is the Director of the Centre for the Study of Modern Slavery, St Mary's University, UK.

Thomas Maguire is a Research Associate at the Department of War Studies, Kings College London, UK.

Emily Winterbotham is a Senior Research Fellow in the National Security and Resilience team at RUSI, UK.