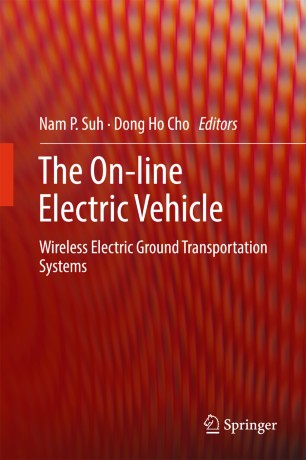 This book details the design and technology of the on-line electric vehicle (OLEV) system and its enabling wireless power-transfer technology, the “shaped magnetic field in resonance” (SMFIR). The text shows how OLEV systems can achieve their three linked important goals:

SMFIR provides power to the OLEV by wireless transmission from underground cables using an alternating magnetic field and the reader learns how this is done. This cable network will in future be part of any local smart grid for energy supply and use thereby exploiting local and renewable energy generation to further its aims.

In addition to the technical details involved with design and realization of a fleet of vehicles combined with extensive subsurface charging infrastructure, practical issues such as those involved with pedestrian safety are considered. Furthermore, the benefits of reductions in harmful emissions without recourse to large banks of batteries are made apparent.

Importantly, the use of Professor Suh’s axiomatic design paradigm enables such a complicated transportation system to be developed at reasonable cost and delivered on time. The book covers both the detailed design and the relevant systems-engineering knowledge and draws on experience gained in the successful implementation of OLEV systems in four Korean cities.

The introduction to axiomatic design and the in-depth discussion of system and technology development provided by The On-line Electric Vehicle is instructive to graduate students in electrical, mechanical and transportation engineering and will help engineers and designers to master the efficient, timely and to-cost implementation of large-scale networked systems. Managers responsible for the running of large transportation infrastructure projects and concerned with technology management more generally will also find much to interest them in this book.

Dong-Ho Cho is the author of several book chapters (by CRC, River Publishers Series in Communications, SAE International). He has published more than 444 scientific publications in international journals and conferences. He holds over 597 patents. He received major awards such as Presidential Citation and Red Stripes Order of Service Merit from the Korean government for his contribution in the area of advanced mobile communication and wireless power transfer technology. In addition, for the major contribution to the development of on-line electric vehicle (OLEV) system, he was selected as a pioneer among 100 persons in Korea by the Dong-A daily newspaper in Korea. He also worked as an official adviser at Ministry of Information and Communication from 2003 to 2007. At KAIST, he was a KT chair professor from 2008 to 2013, and the ICC (IT Convergence Campus) vice president of KAIST from 2011 to 2013. He was the president of Korean Institute of Communications and Information Sciences (KICS) in 2014.