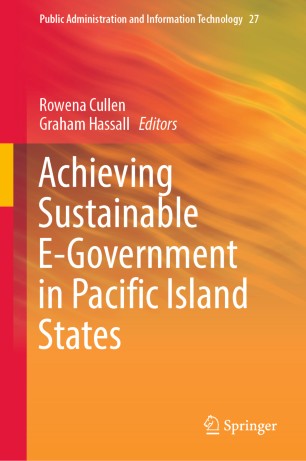 This book analyzes the common set of obstacles to the development and integration of government Information and Communication Technology (ICT) projects and effective e-government initiatives in developing countries. It draws on the expertise and experience of more developed states in the Pacific, notably Australia and New Zealand, both highly rated in global rankings for e-government and active in a variety of e-government development projects across the region.

There has been a general failure to identify priorities and align projects with local needs in ICT/e-government projects. Small Island Developing States (or SIDS) present a unique problem in terms of e-government. Not only do they suffer from a common set of barriers to ICT development such as their remoteness, geographical dispersion, moist tropical climates, largely rural populations, and lack of ICT capacity and infrastructure, but are also dependent on external agencies for investment, and must negotiate with powerful donors who have conflicting agendas.

E-government is widely regarded as 'transformational', increasing efficiency, productivity, accountability, economic growth, and citizen involvement. But while the governments of SIDS are committed to harnessing ICTs for effective government and economic development, they face major challenges in establishing successful e-government initiatives, due to the problems outlined above, coupled with a lack of HR capacities and appropriate strategies and policies.

Drawing on the experience of the states mentioned above, as well as regional quasi-governmental bodies, nongovernmental organizations (NGOs), aid agencies, and the private sector, the book will be of interest to researchers and students in the fields of e-government, public administration, political science, communication, information science, and social media.

Rowena Cullen (Ed.) is an Emeritus Professor in Information Management at Victoria University of Wellington. She held the position of Associate Dean, Research in the Victoria Business School from 2009 -2013, and prior to that held roles as Head of School, and Director Research in the School of Information Management. Rowena has received a number of awards both within the university, and from professional bodies such as LIANZA (she holds a Fellowship and was made an Honorary Life member in 2012), and has had an active research career covering a number of related fields in information management, contributing to international research communities in the field of e-government, health informatics, and librarianship. She is currently on the editorial boards in a number of journals in these fields. Rowena's current research focuses on the development of sustainable models of e-government for Pacific Island States, and with co-researcher Dr Graham Hassall from the School of Government, she is a participant in Pacific IT research communities investigating effective ways of using ICTs for the enhancement of government and governance in the Pacific.Graham Hassall (Ed.) commenced as Associate Professor, Public Policy and Administration, in the School of Government at Victoria University of Wellington in 2010 after teaching at the University of the South Pacific 2004-2009, Landegg Academy in Switzerland 2000-2003, and the University of Melbourne 1990-2000.  He has also had visiting positions at the University of Papua New Guinea, the National Research Institute in Papua New Guinea, the Graduate School of International Development, Nagoya University, Japan, and the School of Global Studies, University of Gothenburg, Sweden. He has participated in a range of academic, professional and policy networks, including LAWASIA; Pacific Islands, Australia and New Zealand Electoral Administrators (PIANZEA); Asia Pacific Mediation Forum (APMF); Global Project for the Prevention of Armed Conflict (GPPAC Pacific);  Building Resources in Democracy, Governance and Elections (BRIDGE); the UNDP’s Informal technical Conflict Prevention and Recovery Consultative Group (CPR CG) for the Pacific region; the Pacific Islands Forum’s Forum Regional Security Committee (FRSC); the Commonwealth Local Government Forum  - Pacific Project (CLGF); Emerging Pacific Leaders Dialogue (EPLD), and the Commonwealth Secretariat’s Commonwealth Pacific Forum of Central Agencies.

“This volume is well integrated and the empirical data and sources presented in each chapter gives readers the opportunity to go from the identification of problems in the local context of the PICs … . The book is suitable for all academics and policy makers interested in practical applications in developing countries. The book presents good examples on how e-government projects can be applied in local situations with limited resources and highly challenging environments.” (Luis Terán, Information Polity, Vol. 23 (1), 2018)
Buy options