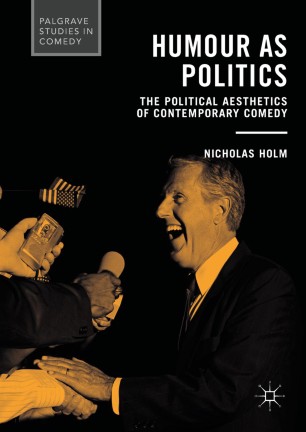 The Political Aesthetics of Contemporary Comedy

This book argues that recent developments in contemporary comedy have changed not just the way we laugh but the way we understand the world. Drawing on a range of contemporary televisual, cinematic and digital examples, from Seinfeld and Veep to Family Guy and Chappelle’s Show, Holm explores how humour has become a central site of cultural politics in the twenty-first century. More than just a form of entertainment, humour has come to play a central role in the contemporary media environment, shaping how we understand ideas of freedom, empathy, social boundaries and even logic. Through an analysis of humour as a political and aesthetic category, Humour as Politics challenges older models of laughter as a form of dissent and instead argues for a new theory of humour as the cultural expression of our (neo)liberal moment.

Nicholas Holm is a lecturer in Media Studies at Massey University, New Zealand. He has written widely on the politics and aesthetics of popular culture, in particular contemporary humour. He is author of Advertising and Society: A Critical Introduction (2016).

“Holm provides deeper insight into the political work of humor in general, observing how the logic of humor might affect our current thinking about liberalism, authority, and dissent. … It provides many conceptual insights and will be of interest to academics in humor studies. … This book is a good start at engaging with comic content from across a few countries in the Western world, through an interdisciplinary lens.” (Veena Raman, International Journal of Communication, Iss (12), 2018)
Buy options