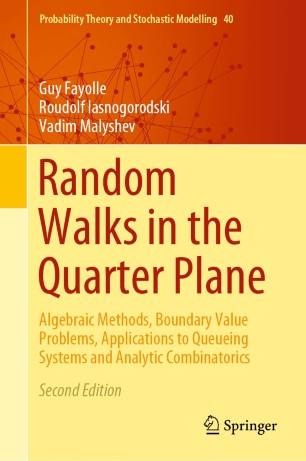 Random Walks in the Quarter Plane

This monograph aims to promote original mathematical methods to determine the invariant measure of two-dimensional random walks in domains with boundaries. Such processes arise in numerous applications and are of interest in several areas of mathematical research, such as Stochastic Networks, Analytic Combinatorics, and Quantum Physics. This second edition consists of two parts.

Part I is a revised upgrade of the first edition (1999), with additional recent results on the group of a random walk. The theoretical approach given therein has been developed by the authors since the early 1970s. By using Complex Function Theory, Boundary Value Problems, Riemann Surfaces, and Galois Theory, completely new methods are proposed for solving functional equations of two complex variables, which can also be applied to characterize the Transient Behavior of the walks, as well as to find explicit solutions to the one-dimensional Quantum Three-Body Problem, or to tackle a new class of Integrable Systems.

Researchers and graduate students should find this book very useful.

G. FAYOLLE: Engineer degree from École Centrale in 1967, Doctor-es-Sciences (Mathematics) from University of Paris 6, 1979. He joined INRIA in 1971. Research Director and team leader (1975-2008), now Emeritus. He has written about 100 papers in Analysis, Probability and Statistical Physics.

R. IASNOGORODSKI: Doctor-es-Sciences (Mathematics) from University of Paris 6, 1979. Associate Professor in the Department of Mathematics at the University of Orléans (France), 1977-2003. He has written about 30 papers in Analysis and Probability.