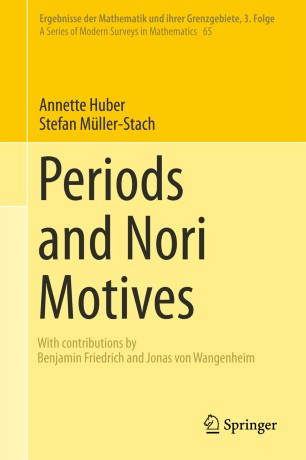 This book casts the theory of periods of algebraic varieties in the natural setting of Madhav Nori’s abelian category of mixed motives. It develops Nori’s approach to mixed motives from scratch, thereby filling an important gap in the literature, and then explains the connection of mixed motives to periods, including a detailed account of the theory of period numbers in the sense of Kontsevich-Zagier and their structural properties.
Period numbers are central to number theory and algebraic geometry, and also play an important role in other fields such as mathematical physics. There are long-standing conjectures about their transcendence properties, best understood in the language of cohomology of algebraic varieties or, more generally, motives. Readers of this book will discover that Nori’s unconditional construction of an abelian category of motives (over fields embeddable into the complex numbers) is particularly well suited for this purpose. Notably, Kontsevich's formal period algebra represents a torsor under the motivic Galois group in Nori's sense, and the period conjecture of Kontsevich and Zagier can be recast in this setting.
Periods and Nori Motives is highly informative and will appeal to graduate students interested in algebraic geometry and number theory as well as researchers working in related fields. Containing relevant background material on topics such as singular cohomology, algebraic de Rham cohomology, diagram categories and rigid tensor categories, as well as many interesting examples, the overall presentation of this book is self-contained.

Annette Huber works in arithmetic geometry, in particular on motives and special values of L-functions. She has contributed to all aspects of the Bloch-Kato conjecture, a vast generalization of the class number formula and the conjecture of Birch and Swinnerton-Dyer. More recent research interests include period numbers in general and differential forms on singular varieties.
Stefan Müller-Stach works in algebraic geometry, focussing on algebraic cycles, regulators and period integrals. His work includes the detection of classes in motivic cohomology via regulators and the study of special subvarieties in Mumford-Tate varieties. More recent research interests include periods and their relations to mathematical physics and foundations of mathematics.

“This book is admirably suited for guiding a course or seminar program on this topic. The authors are to be congratulated on producing an important contribution to the mathematical literature on motives and their application to central problems in algebraic geometry and arithmetic.” (Marc Levine, Jahresbericht der Deutschen Mathematiker-Vereinigung, August 13, 2019)
“The book under review provides a detailed account on some of the theory of so-called Nori motives … . The authors provide a lot of details and background information, making this book very accessible. … this book is a valuable contribution to the field of motives. Particularly commendable is the attention to detail, which can sometimes be missing in this field riddled with conjectures and folklore results. The expository nature makes this book useful to a wide audience.” (Tom Bachmann, zbMATH 1369.14001, 2017)

“This text is both a stimulating introduction and a sound comprehensive reference for anyone interested in the field of motives and periods. … All things considered, I strongly feel that the authors deserve praise for their valiant work. They have fulfilled their difficult program bravely and efficiently.” (Alberto Collino, Mathematical Reviews, 2017)