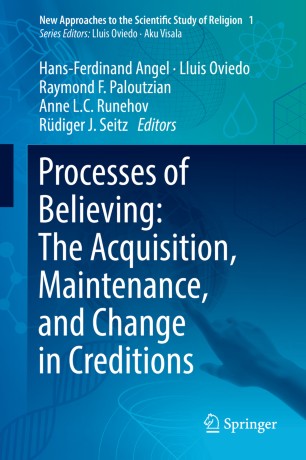 Processes of Believing: The Acquisition, Maintenance, and Change in Creditions

Part of the New Approaches to the Scientific Study of Religion book series (NASR, volume 1)

This volume answers the question: Why do we believe what we believe? It examines current research on the concept of beliefs, and the development in our understanding of the process of believing. It takes into account empirical findings in the field of neuroscience regarding the processes that underlie beliefs, and discusses the notion that beyond the interactive exploratory analysis of sensory information from the complex outside world, humans engage in an evaluative analysis by which they attribute personal meaning and relevance to the probabilistic representations of objects and events.

Beliefs exert a strong influence on behaviour, decision-making, and identifying and solving problems. Despite their importance, beliefs have until recently not been at the centre of scientific interest. In fact, “belief” is an ill-defined phenomenon. From a transdisciplinary perspective the actual approaches to understanding belief seem incompatible as they attempt to highlight such different topics as “belief – religion”, “belief – spirituality”, “belief – faith”, “belief – knowledge”, “belief – attitude”, “belief – disbelief”, “belief – illusion”, and “believing – brain function”. This situation contradicts the idea that belief is close to pathological phenomena and that it should be eliminated from scientific discussions. Rather, believing is fundamental for understanding the many problems of every-day life. In fact, the book shows that beliefs are relevant for politics, international affairs, economy, law, or religions also in modern societies. This book presents the increasing scientific interest in beliefs and believing, and reflects the change in focus from the content aspect of belief towards the fluid nature of believing.

Bab Configuration and Space of Action Belief, faith and trust Beliefs in Relation to Each Other Believing and Stability as the Grounding of Faith Believing in the Economic Sphere Cognition, Affection, and Believing Delusions and Mind-tricks How Beliefs are Insulated, Changed, Stabilized, and Modulated Inferring Beliefs in the Minds of Others Placebos and Nocebos Processes and Functions of Believing Religious believing Scope and Reach of Creditions Wisdom and Knowledge in Believing

Hans-Ferdinand Angel, trained in theology, ancient Latin philology, and history, studied in Regensburg (Germany) and Paris. From 1996 he was Professor at the Technical University Dresden (Germany) and, since 1997, is Professor of Catechetics and Religious Education at the Karl-Franzens University Graz (Austria). He is member of the advisory committee of the Initiative of Brain Research in Syria and the scientific director of the global and interdisciplinary Credition Research Project at the Karl-Franzens University of Graz.

Raymond F. Paloutzian received his doctorate from Claremont Graduate School and is Professor Emeritus of experimental and social psychology at Westmont College, Santa Barbara (California). He edited The International Journal for the Psychology of Religion for 18 years and is consultant to the Religion, Experience, and Mind Lab Group at the University of California, Santa Barbara. He co-edited (with A. Kalayjian) Forgiveness and Reconciliation: Psychological Pathways to Conflict Transformation and Peace-Building, Springer, 2010.