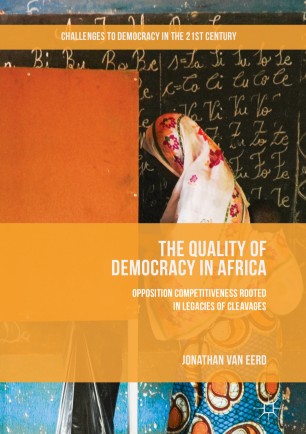 The Quality of Democracy in Africa

This book shows that democratization in sub-Saharan Africa can be successful, even if the government remains dominated by one major political party. If an institutionalized and strong opposition party – even when too weak to take power – challenges the dominant government party, the quality of democracy improves substantially. The comparative study demonstrates that competitive opposition parties in dominant party systems are rooted in the historical legacy of political cleavages related to de-colonization that precede the third wave of democratization of the 1990s and have survived the instability of post-independence political developments to the present day. The study covers 19 African countries and 55 elections overall, including four in-depth case studies of Botswana, Lesotho, Ghana and Mali. It offers scholars and practitioners of electoral democracies and competitive authoritarian regimes a novel view on the role of party systems in processes of democratization. It makes an important contribution to the general literature on state building intertwined with democratization and representation in old and new democracies.

Jonathan van Eerd is a political analyst specialized on Africa. He is a former senior research and teaching associate at the Department for Political Science, University of Zurich, Switzerland. His research and teaching focus on democratization processes and party systems. Jonathan was a visiting scholar at Cornell University, N.Y., with university affiliations in Botswana, Lesotho and Ghana.

“In recent years, the functioning of political parties and party systems in Africa has received increasing research attention. The Quality of Democracy in Africa: Opposition Competitiveness Rooted in Legacies of Cleavages forms one of the latest contributions to this important research area. … For specialized scholars, the work provides interesting insights and sets the path for new avenues of research.” (Leila Demarest, Democratization, Vol. 25 (5), August, 2017)
Buy options