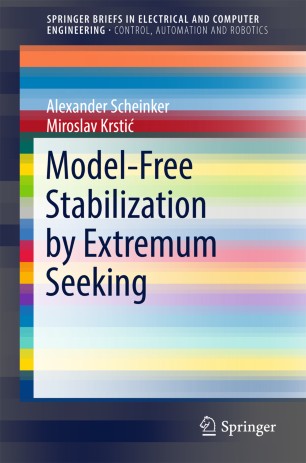 With this brief, the authors present algorithms for model-free stabilization of unstable dynamic systems. An extremum-seeking algorithm assigns the role of a cost function to the dynamic system’s control Lyapunov function (clf) aiming at its minimization. The minimization of the clf drives the clf to zero and achieves asymptotic stabilization. This approach does not rely on, or require knowledge of, the system model. Instead, it employs periodic perturbation signals, along with the clf. The same effect is achieved as by using clf-based feedback laws that profit from modeling knowledge, but in a time-average sense. Rather than use integrals of the systems vector field, we employ Lie-bracket-based (i.e., derivative-based) averaging.

The brief contains numerous examples and applications, including examples with unknown control directions and experiments with charged particle accelerators. It is intended for theoretical control engineers and mathematicians, and practitioners working in various industrial areas and in robotics.