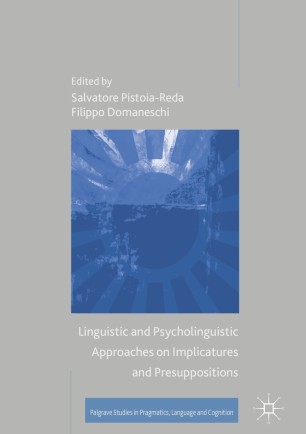 Linguistic and Psycholinguistic Approaches on Implicatures and Presuppositions

Part of the Palgrave Studies in Pragmatics, Language and Cognition book series (PSPLC)

This book discusses developments in the study of implicatures and presuppositions, drawing on recent linguistic and psycholinguistic literature. It provides original discussions of specific formal aspects of the theoretical reconstruction of these phenomena. The authors offer innovative experimental analyses in which crucial processing questions are addressed, and new experimental methodologies are introduced. The result is an advanced debate featuring broad empirical coverage of the issues, as well as an informed discussion of the connections between a Compositional Semantics and a Pragmatic Theory of Implicit Communication, in light of the empirical data coming from Experimental Semantics and Pragmatics. This book will be a worthwhile read for those with interests in both the formal and methodological aspects of these arguments.

Salvatore Pistoia-Reda is a Researcher at Zentrum für Allgemeine Sprachwissenschaft (ZAS), Germany, and a Research Fellow at Università di Siena, Dipartimento di Scienze Sociali, Politiche e Cognitive (DISPOC), Italy. He is the author of various publications in the Philosophy of Language, particularly in Semantics and Pragmatics. He holds or has held fellowships with several international institutions, including the Fulbright and the Humboldt foundations.
Filippo Domaneschi is Lecturer and Researcher in the Psychology of Language at the University of Genoa, Italy, and is Director of the research project EXPRESS – Experimenting on Presuppositions. He is author of various psycholinguistic papers in scientific journals, and of Presuppositions and Cognitive Processes (2016), Introduction to Pragmatics (2014), and is  co-editor of What is Said and What is Not (2013,) and editor of the special issue, Presuppositions: Philosophy, Linguistics and Psychology (2016).