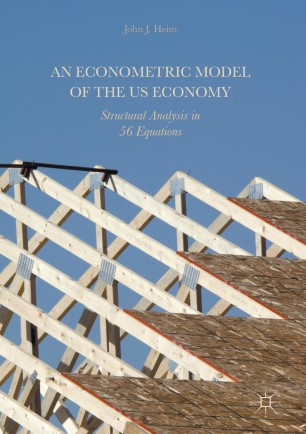 An Econometric Model of the US Economy

This book explores the US economy from 1960 to 2010 using a more Keynsian, Cowles model approach, which the author argues has substantial advantages over the vector autoregression (VAR) and dynamic stochastic general equilibrium (DSGE) models used almost exclusively today. Heim presents a robust argument in favor of the Cowles model as an answer to the pressing, unresolved methodological question of how to accurately model the macroeconomy so that policymakers can reliably use these models to assist their decision making. Thirty-eight behavioral equations, describing determinants of variables such as consumption, taxes, and government spending, are connected by eighteen identities to construct a comprehensive model of the real US economy that Heim then tests across four different time periods to ensure that results are consistent. This comprehensive demonstration of the value of a long-ignored model provides overwhelming evidence that the more Keynesian (Cowles) structural models outperform VAR and DSGE, and therefore should be the models of choice in future macroeconomic studies.