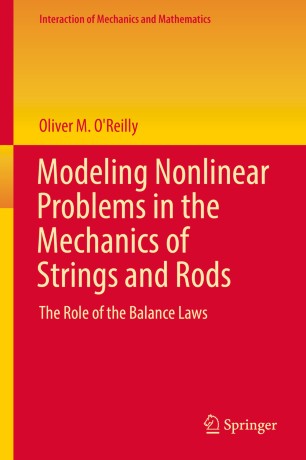 Modeling Nonlinear Problems in the Mechanics of Strings and Rods

The Role of the Balance Laws

Part of the Interaction of Mechanics and Mathematics book series (IMM)

This book presents theories of deformable elastic strings and rods and their application to broad classes of problems. Readers will gain insights into the formulation and analysis of models for mechanical and biological systems. Emphasis is placed on how the balance laws interplay with constitutive relations to form a set of governing equations. For certain classes of problems, it is shown how a balance of material momentum can play a key role in forming the equations of motion. The first half of the book is devoted to the purely mechanical theory of a string and its applications. The second half of the book is devoted to rod theories, including Euler’s theory of the elastica, Kirchhoff ’s theory of an elastic rod, and a range of Cosserat rod theories. A variety of classic and recent applications of these rod theories are examined. Two supplemental chapters, the first on continuum mechanics of three-dimensional continua and the second on methods from variational calculus, are included to provide relevant background for students.

This book is suited for graduate-level courses on the dynamics of nonlinearly elastic rods and strings.

Oliver M. O’Reilly is a professor in the Department of Mechanical Engineering at the University of California at Berkeley (UCB). He received his B.E. in Mechanical Engineering from the National University of Ireland, Galway (NUIG) in 1985. Subsequently, he received his M.S. and Ph.D. degrees in Theoretical and Applied Mechanics from Cornell University. At Cornell, he studied under Phil Holmes and Frank Moon. Prior to joining the faculty at UCB in 1992, he spent two years as a postdoctoral researcher at the Institut für Mechanik at ETH-Zürich under Jürg Dual.

O’Reilly’s interests span the fields of continuum mechanics and nonlinear dynamics. He has a broad range of specializations including Cosserat theories of deformable bodies, constrained rigid body dynamics, contact mechanics, linear and nonlinear vibrations, and linear and nonlinear dynamics of deformable bodies. He has applied these interests to a range of applications including soft robots, MEMS resonators, brake squeal, the dynamics of toys, motorcycle navigation, axially moving media, artificial and natural satellites, spinal kinematics, and vehicle collision dynamics. O’Reilly has coauthored over 90 archival journal articles, written three text books and is a co-inventor on two patents. He has also received several teaching awards including U.C. Berkeley's Distinguished Teaching Award in 1999, the Pi-Tau-Sigma Professor of the Year Award in 2003 and the Tau-Beta-Pi Outstanding Faculty of the Year Award in 2013.

“This graduate-level textbook presents models of rods and strings obtained by using balance laws. … It will introduce students, especially those who are research-oriented, into modern theories. I believe that the book under review is an important addition to the subject, and I strongly recommend it to students and researchers in continuum mechanics, especially in the field of rods and strings.” (Teodor Atanacković, zbMATH 1370.74001, 2017)
Buy options