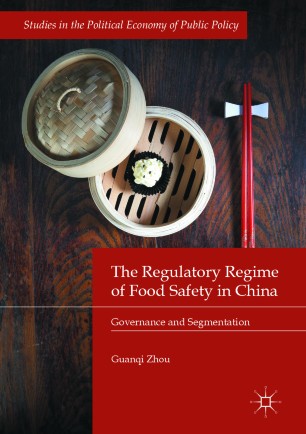 The Regulatory Regime of Food Safety in China

‘This is a path breaking and innovative book on regulatory governance of food safety in China. Going beyond explanations of institutional dysfunction it locates the source of regulatory failure in the social foundations of segmented governance of food safety. It focuses on the social dynamics of the Chinese regulatory state.’
– Kanishka Jayasuriya, Professor and Head of Politics and International Studies, Murdoch University, Western Australia
‘Through vivid narratives on various cases, and rigorous and illuminating analysis, Zhou builds a clear and convincing argument that failures of food safety regime in China rest on long-established regulatory segmentation. The book links regulatory theory with sociological analysis of four distinct social strata of consumers, peeling away layers of institutional change to reveal often eye-opening patterns of uneven and fragmented regulation. As well as its contemporary relevance to the culturally and politically charged topic of food in a globalising world, the book has stimulating implications for the salience of regulatory theory beyond the terrain of industrialised democracies.’
–  Bronwen Morgan, Professor and Australian Research Council Future Fellow, Faculty of Law, The University of New South Wales, Australia
This book examines the decade from 2004 to 2013 during which people in China witnessed both a skyrocketing number of food safety crises, and aggregating regulatory initiatives attempting to control these crises. Multiple cycles of “crisis – regulatory efforts” indicated the systemic failure of this food safety regime. The book explains this failure in the “social foundations” for the regulatory governance of food safety. It locates the proximate causes in the regulatory segmentation, which is supported by the differential impacts of the food regulatory regime on various consumer groups. The approach of regulatory segmentation does not only explain the failure of the food safety regime by digging out its social foundation, but is also crucial to the understanding of the regulatory state in China.
Guanqi Zhou is Lecturer at Yunnan University, People’s Republic of China. She won the Australian Prime Minister’s Asia Endeavour Award in 2013, and is co-editor of The Sustainable Development of Agriculture in China’s Plateau Regions (2015).