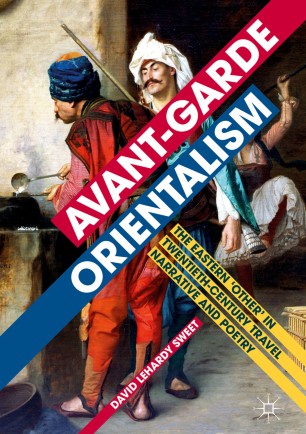 The Eastern 'Other' in Twentieth-Century Travel Narrative and Poetry

This study explores the work of Western avant-garde writers who traveled to and wrote about Asia and North Africa. Though exoticist in outlook, many of these writers were also anti-colonialist and thus avoided some of the pitfalls of academic orientalism by assuming an aesthetics of diversity while employing strategies of provocation and reciprocity. As a survey of works on travel (including essays, novels, poems, and plays), the book challenges or modifies many postcolonial assumptions about Western writers on the Orient: from the French Surrealists to the American Beats and even transnational authors of the new millennium. Through a synthesis of avant-garde, postcolonial, and travel literature theories, Avant-garde Orientalism works in the best tradition of comparative literary study to identify and analyze a distinct category of world literature.

David LeHardy Sweet is the author of Savage Sight/Constructed Noise: Poetic Adaptations of Painterly Techniques in the French and American Avant-gardes and the translator of Jean Baudrillard’s The Divine Left. He received his doctorate in Comparative Literature from Columbia University and has taught literature at various universities in New York, Chicago, Paris, and Cairo. He now lives in New York.

“Sweet goes so far as to claim that these [avant-garde] travel writings can at times prove more effective than postcolonial critique because they work ‘by stealth and disguise to unleash a kind of generalized laughter’ at orientalist assumptions … . Fictional strategies, like parody, counter orientalism by showcasing its nonsensical nature, whereas postcolonial theory always risks aggrandizing orientalism through the very operation of critique. While critique takes orientalism too seriously, fiction knows it to be a fantasy ripe for parody.” (Jonathan Fardy, A Review of International English Literature, Vol. 51 (1), January, 2020)
“Sweet avoids the pitfall of generalization and is careful to analyze what sets his many authors apart thanks to his method of ‘simultaneous cultural contrasts’ (Robert Delaunay), which makes it possible to expose starkly different and oftentimes contradictory portraits of the Orient, including several transnational English-language authors of the new millennium.” (Tom Conner, French Review, Vol. 92 (3), March, 2019)
“Sweet recognizes that ‘avant-garde principles of formal innovation … reinforce traditional orientalist discursive practice while also, at crucial moments, radically altering it’ (2). Thus, Sweet is not trying to replace critical readings with positive ones but rather to recuperate visions of radical acceptance within moments that also reassert stereotypes.” (Kyle Garton-Gundling’s, ALH Online Review, May, 2018)
“Sweet concludes his monograph by arguing how avant-garde orientalism is a type of World Literature that differs from other orientalist literatures through its ‘alternating strategies of aggression and reciprocity’ as well as its ‘genuine commitment to alterity, the alterity of an imaginary, participatory future … .” (Joey S. Kim, Postcolonial Studies, February, 2018)
Buy options