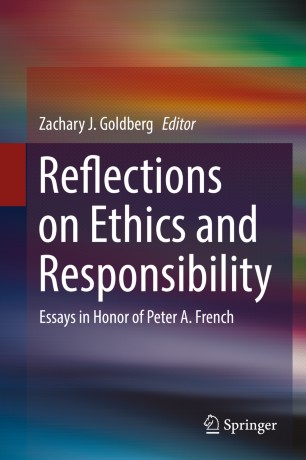 Reflections on Ethics and Responsibility

Essays in Honor of Peter A. French

The original essays in this book address the influential writings of Peter A. French on the nature of responsibility, ethics, and moral practices. French’s contributions to a wide spectrum of philosophical discussions have made him a dominant figure in the fields of normative ethics, meta-ethics, applied ethics, as well as legal and political philosophy. Many of French’s deepest insights come from identifying and exploring the scope and nature of moral responsibility and human agency as they appear in actual events, real social and cultural practices, as well as in literature and film. This immediacy renders French’s scholarship vital and accessible to a wide variety of audiences. The authors, recognized for their own contributions to the understanding of the nature of morality and moral practices offer new and unique positions while exploring, expanding and responding to those of French. The final chapter is written by French, in which he provides both new philosophical insight as well as some reflection on his own work and its influence. This book will appeal to philosophers, as well as advanced students and researchers in the humanities, social sciences, law, and political science.

Zachary J. Goldberg is currently Principal Investigator of the DFG Research Grant “Components of Evil: An Analysis of Secular Moral Evil and its Normative and Social Implications” in the Department of Philosophy at Ludwig-Maximilians-Universität Munich. Prior to taking up this position he was Postdoctoral Researcher in Normative Ethics at the University of Regensburg. He holds a Ph.D. in philosophy from Arizona State University, a M.A. in philosophy from Stony Brook University, and a B.A. summa cum laude in philosophy from Emory University. His research and publications focus on the metaethical status and normative significance of moral evil, individual and collective responsibility for acts of evil, the moral psychology of perpetrators of evil, and the moral and political basis of redress for historical injustices.

“Reflections on Ethics and Responsibility: Essays in Honor of Peter A. French is a collection of essays written in the analytic tradition on moral agency and responsibility that address a variety of topics in ethics found in the work of ethicist Peter A. French. … I strongly recommend this collection of essays for academic libraries. The work of French and his commenters has substantive practical implications for a variety of fields in ethics … .” (William Simkulet, metapsychology.mentalhelp.net, Vol. 22 (26), June, 2018)
Buy options