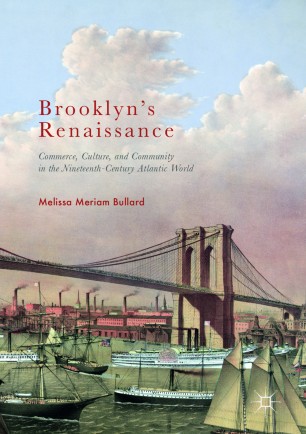 Commerce, Culture, and Community in the Nineteenth-Century Atlantic World

This book shows how modern Brooklyn’s proud urban identity as an arts-friendly community originated in the mid nineteenth century.  Before and after the Civil War, Brooklyn’s elite, many engaged in Atlantic trade, established more than a dozen cultural societies, including the Philharmonic Society, Academy of Music, and Art Association.  The associative ethos behind Brooklyn’s fine arts flowering built upon commercial networks that joined commerce, culture, and community.  This innovative, carefully researched and documented history employs the concept of parallel Renaissances.  It shows influences from Renaissance Italy and Liverpool, then connected to New York through regular packet service like the Black Ball Line that ferried people, ideas, and cargo across the Atlantic.  Civil War disrupted Brooklyn’s Renaissance.  The city directed energies towards war relief efforts and the women’s Sanitary Fair.  The Gilded Age saw Brooklyn’s Renaissance energies diluted by financial and political corruption, planning the Brooklyn Bridge and consolidation with New York City in 1898.

Melissa Meriam Bullard is Professor of Renaissance and Early Modern European History at the University of North Carolina at Chapel Hill, USA.  She has published extensively on the history of the Medici and Florence and recently on the reach of the Italian Renaissance into the nineteenth-century.  She brings an Atlantic world perspective of parallel Renaissances to Brooklyn’s history.