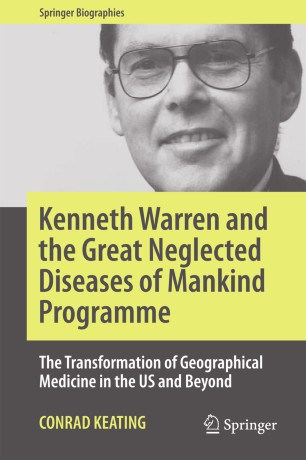 Kenneth Warren and the Great Neglected Diseases of Mankind Programme

The Transformation of Geographical Medicine in the US and Beyond

Kenneth Warren was a powerful figure in twentieth century medicine whose work transformed public health policy and tropical medicine, and who left a profound legacy in global health thinking. A prolific writer and researcher, Warren was respected for his scientific research, winning awards and accolades, while his later role as activist, agitator, innovator and connoisseur of science brought him international recognition.  His career in medicine is remembered for three enduring achievements:

· His tenure as Director of Health Sciences at the Rockefeller Foundation, during which time he inaugurated the Great Neglected Diseases of Mankind Programme

Told through personal interviews with both Warren’s supporters and detractors, the story of Warren’s career, inexorably interwoven with the GND programme, is a compelling narrative that has not only enduring implications for current medical research, funding and healthcare across the globe, but also a long-standing legacy for the future ways in which we combat disease in the developing world.

Conrad Keating is the Writer-in-Residence at the Wellcome Unit for the History of Medicine at the University of Oxford.  He is the author of the widely-acclaimed biography of the British epidemiologist Sir Richard Doll, Smoking Kills: The Revolutionary Life of Richard Doll. His most recent publication, Great Medical Discoveries: An Oxford Story, accompanied the exhibition ‘Great Medical Discoveries: 800 Years of Oxford Innovation’ which he curated for the Bodleian Library. He lives in Oxford.

“The book is eminently readable and meticulously annotated with numerous references. All in all, Kenneth Warren and the Great Neglected Diseases of Mankind is not only a joy but a remarkable work of scholarship. It deserves a wide readership and much critical success.” (G. J. V. Nossal, International Journal of Epidemiology, July, 2017)

“Well researched, informative book … . [about] an American physician and parasitologist with an out-sized ego, enormous charisma, and sense of urgency about elimination of a long list of… neglected tropical diseases, such as schistosomiasis, leishmaniasis, and hookworm.”  (Laurie Garrett, The Lancet, Volume 389, May, 2017)
Buy options