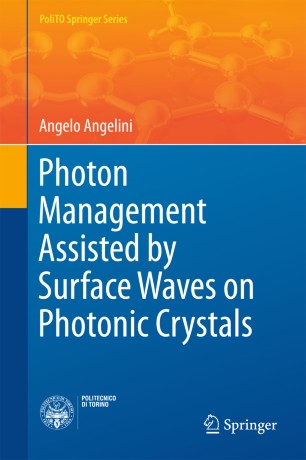 This book illustrates original pathways to manipulate light at the nanoscale by means of surface electromagnetic waves (here, Bloch surface waves, BSWs) on planar dielectric multilayers, also known as one-dimensional photonic crystals. This approach is particularly valuable as it represents an effective alternative to the widely exploited surface plasmon paradigm. After a brief overview on the fundamentals of BSWs, several significant applications of BSW-sustaining structures are described. Particular consideration is given to the propagation, guiding, and diffraction of BSW-coupled radiation. Further, the interaction of organic emitters with BSWs on planar and corrugated multilayers is investigated, including fluorescence beaming in free space. To provide greater insight into sensing applications, an illustrative example of fluorescent microarray-based detection is presented. The book is intended for scientists and researchers working on photon management opportunities in fields such as biosensing, optical circuitry, and lighting.

Angelo Angelini is a Post-doctoral Fellow in the Department of Applied Science and Technology (DISAT) at the Polytechnic of Turin, where he carries out teaching and research focusing on the development of 3D imaging techniques and the characterization of optically driven devices. Dr. Angelini graduated in Physics Engineering at the Polytechnic of Turin in 2011. During the course of his studies, he spent 6 months at the Biomedical Engineering Department of Columbia University. On the basis of his research activity at the National Institute of Metrological Research (INRIM) and at the Polytechnic of Turin, he completed his doctorate in electronic devices in 2015, for which he was awarded the Best PhD Student Award 2015. Dr. Angelini is the author of more than 15 papers in highly regarded scientific journals and is a reviewer for several international journals. He is co-inventor of a patent and has been an invited speaker at international and national conferences.