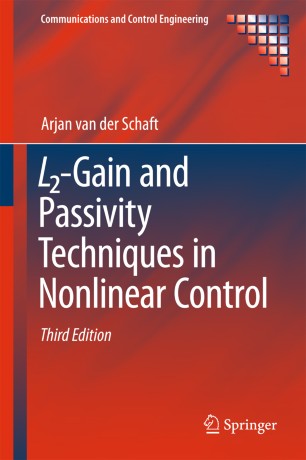 Feedback equivalence to a passive system and resulting stabilization strategies are discussed. The passivity concepts are enriched by a generalised Hamiltonian formalism, emphasising the close relations with physical modeling and control by interconnection, and leading to novel control methodologies going beyond passivity.

The potential of L2-gain techniques in nonlinear control, including a theory of all-pass factorizations of nonlinear systems, and of parametrization of stabilizing controllers, is demonstrated. The nonlinear H-infinity optimal control problem is also treated and the book concludes with a geometric analysis of the solution sets of Hamilton-Jacobi inequalities and their relation with Riccati inequalities for the linearization.

·       L2-Gain and Passivity Techniques in Nonlinear Control (third edition) is thoroughly updated, revised, reorganized and expanded. Among the changes, readers will find:

<·         coverage of recent developments on networks of passive systems with examples

The book provides graduate students and researchers in systems and control with a compact presentation of a fundamental and rapidly developing area of nonlinear control theory, illustrated by a broad range of relevant examples stemming from different application areas.

He has served as Associate Editor for Systems & Control Letters, Journal of Nonlinear Science, SIAM Journal on Control and Optimization, IEEE Transactions on Automatic Control and the European Journal of Control. Currently he is on the Editorial Board for the Journal of Geometric Mechanics and Annual Reviews in Control.

Arjan van der Schaft is Fellow of the Institute of Electrical and Electronics Engineers (IEEE) and of the International Federation of Automatic Control (IFAC). He was Invited Lecturer at the International Congress of Mathematicians, Madrid, Spain, 2006. He is the 2013 recipient of the 3-yearly awarded Certificate of Excellent Achievements} of the IFAC Technical Committee on Nonlinear Systems.

He (co-)authored around 125 journal articles and 265 refereed contributions to proceedings or book chapters.

“The book presents a well written and systematically organized text focused on a unified treatment of classical input-output stability theory and recent results in nonlinear robust and passivity-based control. … The book will be useful to advanced graduate students, researchers and applied mathematicians interested in this emerging area.” (Lubomír Bakule, zbMath 1410.93004, 2019)
“This text is sure to continue to be one of the go-to references for nonlinear control researchers and practitioners interested in both the classical and modern interpretations and applications of L2-gain and passivity methods for nonlinear systems.” (James Richard Forbes, IEEE Control Systems Magazine, December, 2017)
Buy options