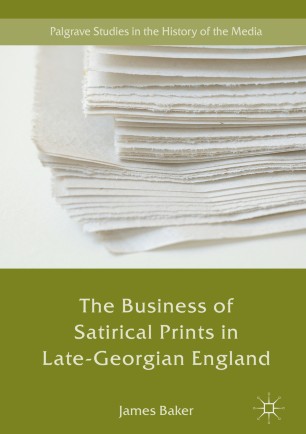 The Business of Satirical Prints in Late-Georgian England

This book explores English single sheet satirical prints published from 1780-1820, the people who made those prints, and the businesses that sold them. It examines how these objects were made, how they were sold, and how both the complexity of the production process and the necessity to sell shaped and constrained the satiric content these objects contained. It argues that production, sale, and environment are crucial to understanding late-Georgian satirical prints. A majority of these prints were, after all, published in London and were therefore woven into the commercial culture of the Great Wen. Because of this city and its culture, the activities of the many individuals involved in transforming a single satirical design into a saleable and commercially viable object were underpinned by a nexus of making, selling, and consumption. Neglecting any one part of this nexus does a disservice both to the late-Georgian satirical print, these most beloved objects of British art, and to the story of their late-Georgian apotheosis – a story that James Baker develops not through the designs these objects contained, but rather through those objects and the designs they contained in the making.

James Baker is Lecturer in Digital History at the University of Sussex, UK. He specialises in the history of the printed image in the long eighteenth century, is a fellow of the Software Sustainability Institute, and has held positions at the British Library, the Paul Mellon Centre for Studies in British Art, and the University of Kent, UK.

“The book opens like a well-spun tale, embarking its readers in the breezy style that characterises James Baker’s prose throughout the book on a journey of discovery through the late-Georgian network of print shops, engravers, publishers, customers and collectors. … The Business of Satirical Prints in Late-Georgian England undoubtedly constitutes an important contribution to the recent scholarship on both graphic satire and the business of art.” (Sophie Mesplède, cercles.com, July, 2018)
Buy options