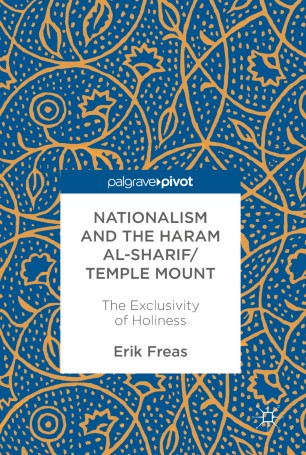 Nationalism and the Haram al-Sharif/Temple Mount

The Exclusivity of Holiness

This book examines the manner in which the Haram al-Sharif/Temple Mount has been appropriated by both Palestinians and Israelis as a nationalist symbol legitimizing respective claims to the land. From the late-nineteenth century onward, the site's significance became reconfigured within the context of modern nationalist discourses, yet, despite the originally secular nature of Palestinian and Israeli nationalisms, the holy site’s importance to Islam and Judaism respectively has gradually altered the character of both in a manner blurring the line between religious and national identities.

Erik Freas is Assistant Professor of Modern Middle East History at the Borough of Manhattan Community College, City University of New York, USA. Freas’s research focuses on Muslim-Christian Arab relations in Palestine during the Mandate and late-Ottoman periods. He is the author of Muslim-Christian Relations in Late Ottoman Palestine: Where Nationalism and Religion Intersect.

“In this fascinating and well researched study of 150 years Erik Freas shows how each of Zionism and the Palestinian national movement, established as secular in-principal, changed the status of al- Haram al-Sharif / Temple Mount from pure national symbol to religious - national identity center. Essential reading to understand the formative role religion has in shaping the Israeli – Palestinian conflict.” (Menachem Klein, Professor, Bar Ilan University, Israel, and author of Lives in Common – Arabs and Jews in Jerusalem, Jaffa and Hebron)
Buy options