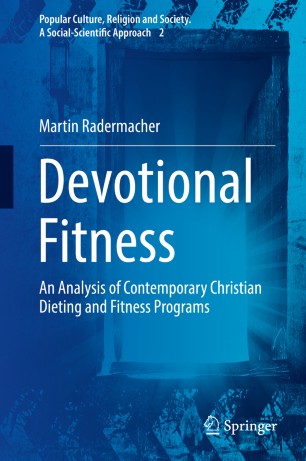 An Analysis of Contemporary Christian Dieting and Fitness Programs

This book examines evangelical dieting and fitness programs and provides a systematic approach of this diverse field with its wide variety of programs. When evangelical Christians engage in fitness and dieting classes in order to “glorify God,” they often face skepticism. This book approaches devotional fitness culture in North America from a religious studies perspective, outlining the basic structures, ideas, and practices of the field. Starting with the historical backgrounds of this current, the book approaches both practice and ideology, highlighting how devotional fitness programs construe their identity in the face of various competing offers in religious and non-religious sectors of society. The book suggests a nuanced and complex understanding of the relationship between sports and religion, beyond ‘simple’ functional equivalency. It provides insights into the formation of secular and religious body ideals and the way these body ideals are sacralized in the frame of an evangelical worldview.

Martin Radermacher is a Research Associate at the Center for Religious Studies (CERES) at Bochum University (Germany). During his doctoral research in the United States, he was affiliated with the Department of Religion at Columbia University, New York. He completed his PhD on evangelical dieting and fitness programs in North America at Münster University (Department of Religion) in 2014 and has published in various volumes on contemporary religion and Christianity. He is co-founder and speaker of the newly established working group on evangelical, pentecostal, and charismatic movements within the German Association for the Study of Religions (DVRW). Besides the entanglements of sports, fitness and religion, his research interests include religion und space/materiality, contemporary religion and spirituality, the history of the study of religions as well as the theory and method of the study of religions.

“This book, while about fitness, also explores the religious side of physical fitness and the role that religion plays in people exercising in their daily lives. … This book presents some interesting thoughts. I feel that the church should do different physical things to help reach out to their community and to improve the health and wellbeing of the church itself. This book will present me with some things to think about as I venture into full-time ministry.” (Justin Dilliplane, Resolved for Christ, resolvedfc.blogspot.de, February, 2018)
Buy options