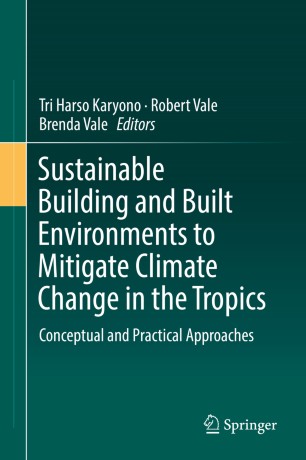 This book offers a selection of the best papers presented during the International conference on Mitigating and Adapting Built Environments for Climate Change in the Tropics, held at Tanri Abeng University (TAU), Jakarta, Indonesia, March 2015.
The book is divided into four main chapters. The first part deals with the general issue of climate change, the cause and the ways to mitigate and to adapt the built environment for climate change in a number of countries. Part 2 deals with the conceptual ways to mitigate building for climate change. The ways to reduce cooling energy in tropical buildings by means of passive design. Part 3 offers papers that examine the way to overcome disasters in the city caused by climate change. The final part deals with the role of plants in mitigating and adapting built environments to climate change  - the use of plants, trees and bushes to directly and indirectly reduce carbon emissions are discussed.

Professor Tri Harso Karyono, Ir (ITB), MA (York), PhD (Sheffield) was trained as an architect and received an engineering degree from Department of Architecture, Bandung Institute of Technology (ITB), Indonesia. He was awarded an MA degree in Third World Architecture courses from The University of York, UK. He received a PhD from the School of Architectural Studies, University of Sheffield, UK. Tri has designed and built some houses, including his own low energy house in Indonesia. He published a numerous articles in the newspapers and architectural magazines related to low energy and sustainable built environments, also published a number of books, including An Introduction to Green Architecture in Indonesia, and Architecture and Cities in the Tropical Third World Country of Indonesia. Tri is now a professor of Architecture, lecturing subject on sustainable built environments in a number of architectural schools in Indonesia.
Professor Robert Vale MA DipArch (Cambridge) PhD (Nottingham)
Professor Brenda Vale MA DipArch (Cambridge) PhD (Sheffield)
Professorial Research Fellows, Victoria University of Wellington, Wellington, New Zealand
Robert and Brenda Vale are architects and academics. They wrote their first book on sustainable design, “The Autonomous House”, in 1975. Following their design of several award winning sustainable commercial buildings in the UK they went on to design and build the UK’s first autonomous house in 1993 and the first zero-emissions settlement in 1998. They have received international recognition, including awards from the United Nations and the European Solar Energy Society. More recently they developed the Australian government’s National Australian Built Environment Rating System (NABERS) which has now been put into operation. Their most recent environmental books are “Time to Eat the Dog? The real guide to sustainable living”, which analysed the impact on the environment of a western life-style and things people do every day and “Living within a Fair Share Ecological Footprint” which has chapters written by many of their former and existing postgraduate students. Their most recent book is "Architecture on the Carpet" which explores the links over the last hundred years between architecture and construction toys such as Meccano and Lego.