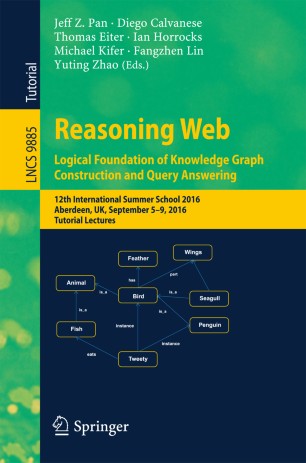 This volume contains some lecture notes of the 12th Reasoning Web Summer School (RW 2016), held in Aberdeen, UK, in September 2016.

In 2016, the theme of the school was “Logical Foundation of Knowledge Graph Construction and Query Answering”. The notion of knowledge graph has become popular since Google started to use it to improve its search engine in 2012. Inspired by the success of Google, knowledge graphs are gaining momentum in the World Wide Web arena. Recent years have witnessed increasing industrial take-ups by other Internet giants, including Facebook's Open Graph and Microsoft's Satori.