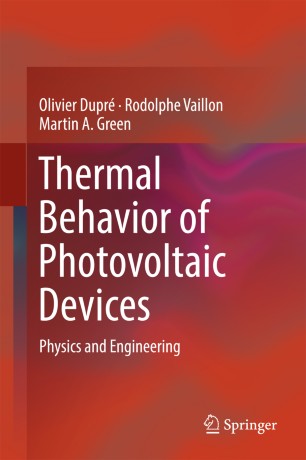 Olivier Dupré received an engineering Master degree in energy and environment and a research Master degree in energetics, from INSA-Lyon, France, in 2011. In 2015, he received the Ph.D. degree from INSA-Lyon, France, for his work on the thermal behavior of photovoltaic devices supervised by Prof. R. Vaillon and Prof. M.A. Green (from the Australian Centre for Advanced Photovoltaics, University of New South Wales, Sydney, Australia). His current research interests include the physics of photovoltaic devices in general and the application of an original design approach of PV systems that takes into account their operating conditions.
Rodolphe Vaillon received the Ph.D. degree from Poitiers University, Poitiers, France, in 1996. He is a CNRS Professor with the Centre for Energy and Thermal Sciences of Lyon, CNRS-INSA Lyon-UCBL, Villeurbanne, France. The present book was prepared while he was the W.W. Clyde Visiting Chair in the Department of Mechanical Engineering at the University of Utah, Salt Lake City, USA. He is an Associate Editor of the Journal of Quantitative Spectroscopy and Radiative Transfer and a Member of the Scientific Council of the International Centre for Heat and Mass Transfer. His current research interests include nanoscale thermal radiation, the thermal behavior of photovoltaic devices and electromagnetic light scattering by complex particles.
Martin A. Green is currently a Scientia Professor with the University of New South Wales, Sydney, N.S.W., Australia, and the Director of the Australian Centre for Advanced Photovoltaics. His group’s contributions to photovoltaics include the development of the world’s highest efficiency silicon cells and commercialization of several different cell technologies. He is the author of numerous papers and several books on solar cells.
Prof. Green’s work has been recognized with major international awards, including the 2002 Right Livelihood Award, also known as the Alternative Nobel Prize, the 2007 Solar World Einstein Award, and the 2010 Eureka Prize for Leadership. In 2012, he was appointed as a Member of the Order of Australia in recognition of his contributions to photovoltaics and photovoltaics education. He has been elected to Fellowship of both the Australian Academy of Science and the Royal Society of London.
O. Dupré (Photovoltaics and Thermal Science specialist), R. Vaillon (Thermal Science specialist) and M.A. Green (internationally recognized Photovoltaics specialist) have been collaborating on a research project dealing with the topic of the book.