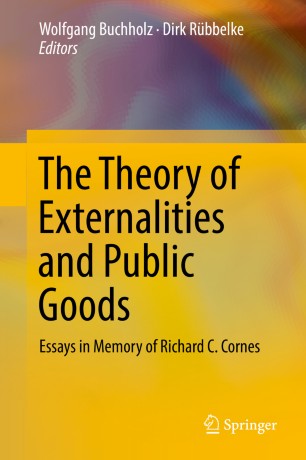 The Theory of Externalities and Public Goods

This state-of-the art collection of papers analyses various aspects of the theory of externalities and public goods. The contributions employ new analytical techniques like the aggregative game approach, and discuss the philosophical underpinnings of the theory. Furthermore, they highlight a range of topical empirical applications including climate policy and counterterrorism. This contributed volume was written in memory of Richard C. Cornes, a pioneer in the theory of externalities and public goods.

Wolfgang Buchholz has studied Mathematics, Economics and Political Science at the Universities of Freiburg and Tübingen, where he got his Ph.D. in Economics in 1982 and finished his Habilitation in 1987. In 1988 he became an associate professor of economics at the University of Regensburg. After an interplay as a professor at the newly founded European University in Frankfurt (Oder) between 1992 and 1996 he returned to Regensburg – now as a full professor of pubic economics. His main fields of research are international environmental economics, the theory of public goods, intertemporal evaluation and discounting, social protection and distribution policy and the links between economics and ethics.

Dirk T.G. Rübbelke is Professor of Economics at Technische Universität Bergakademie Freiberg. Before he joined Technische Universität Bergakademie Freiberg, he was IKERBASQUE Research Professor at the Basque Centre for Climate Change (2010-2014), Senior Research Fellow at the Center for International Climate and Environmental Research – Oslo (2008-2010) and Juniorprofessor at Chemnitz University of Technology (2002-2008). He is also Research Associate at the Centre for European Economic Research (ZEW), Mannheim and Fellow Member in the CESifo Research Network, Munich. Prof. Rübbelke did research and taught at internationally renowned universities and research centres. These are, inter alia, Australian National University in Canberra, Hebrew University Jerusalem, Jadavpur University in Kolkata, Max Planck Institute for Tax Law and Public Finance in Munich and University of Nottingham. He has published in internationally renowned journals such as Climatic Change, Economica, Economics Letters, Environmental and Resource Economics, Journal of Public Economics, Journal of Public Economic Theory, Resource and Energy Economics, and World Economy.

“The Theory of Externalities and Public Goods: Essays in Memory of Richard C. Cornes provides a variety of state-of-the-art essays on the topics of public goods, contests, and clubs. It includes many real-world applications, such as to environmental policies and climate change. Professor Richard Cornes has had a tremendous and far-reaching intellectual influence, so it is not surprising that the book contains several outstanding contributions.” (Nizar Allouch, Journal of Economic Literature, Vol. 56 (4), December, 2018)​
Buy options