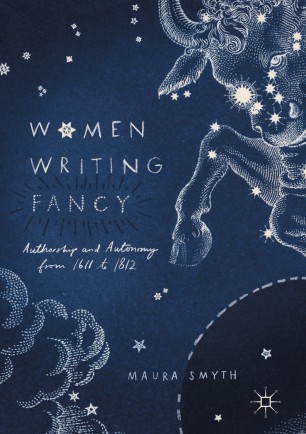 This book brings to the foreground the largely forgotten “Fancy” of the seventeenth and eighteenth centuries and follows its traces as they extend into the nineteenth and twentieth. Trivialized for its flightiness and femininity, Fancy nonetheless provided seventeenth- and eighteenth-century women writers such as Margaret Cavendish, Aphra Behn, Delarivier Manley, Eliza Haywood, and Anna Barbauld a mode of vision that could detect flaws in the Enlightenment’s patriarchal systems and glimpse new, female-authored worlds and genres. In carving out unreal, fanciful spaces within the larger frame of patriarchal culture, these women writers planted Fancy—and, with it, female authorial invention—at the cornerstone of Enlightenment empirical endeavor. By finally taking Fancy seriously, this book offers an alternate genealogy of female authorship and a new framework for understanding modernity’s triumph.

Maura Smyth is Assistant Professor of Liberal Arts at Massachusetts College of Art and Design. Previously, she was a Junior Fellow at the Harvard Society of Fellows

“It offers not only an entirely new way of thinking about how creativity was conceptualized in the early modern period, but also a model of fine-grained, imaginative textual criticism that gives proper consideration to the fleeting, overlooked, and imperfect spaces in which such creativity was practiced by women.” (Natasha Simonova, Early Modern Women Journal, Vol. 14 (1), 2019)
Buy options