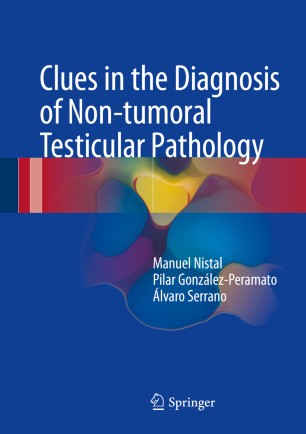 Clues in the Diagnosis of Non-tumoral Testicular Pathology

This book presents the morphology of different non-tumoral lesions of the testis. By showing the differential diagnosis of each lesion, it offers clinicians vital support with diagnosis and treatment. The book is divided into seven main parts: genetic and developmental pathology of the testis; infertility; vascular pathology of the testis; inflammatory pathology; pathology of the rete testis and epididymis; pathology of the vaginal tunic and paratesticular structures; and a final part dealing with miscellanea. Each chapter includes carefully selected figures and a variety of diagrams highlighting the main characteristics of a specific lesion to facilitate its diagnosis.
Based on the authors’ experience with hundreds of biopsies, surgical specimens and autopsies, the book presents material that has been gathered over the past 40 years, providing an essential tool for pathologists, urologists, andrologists and pediatricians who face diagnostic problems.

“This book is written primarily for pathologists and their trainees, but I assume that it will be read and/ or consulted by urologists, andrologists, endocrinologists, and other physicians interested in developmental disorders of the gonads and infertility. … Well written, well organized and judiciously illustrated, it contains all that you wanted to know about the non- neoplastic testis and its adnexa but were afraid to ask or did not know where to find the answer.” (Ivan Damjanov, Doody’s Book Reviews, June, 2017)
Buy options